New funding to unlock the mysteries of how babies' brains develop A prestigious Synergy grant award from the European Research Council will fund research into mapping the development of babies' brains.

A new project to discover how brains develop during the last third of pregnancy has received €15 million from the European Research Council (ERC) as one of only 11 new prestigious Synergy grants throughout Europe.

Professor Daniel Rueckert (Computing) has received a €3,250,000 share of the funding for the Developing Human Connectome Project, led by King’s College London. The project will create a picture of how babies’ brains develop and form connections. This will allow researchers to understand how development differs in conditions such as Autistic Spectrum Disorder, where parts of the brain have are thought to have abnormal connection patterns.

“Our role is to build a platform for the analysis of the huge amount of data, showing how the different parts of the brain interact,” said Professor Rueckert, who will partner Professor David Edwards and Professor Joseph Hajnal from King’s College London and Professor Steve Smith from the University of Oxford.

“What we’ll try to do is find patterns of connections in the brain as they occur and match these to clinical data, such as medical notes, on how the child develops,” he added. 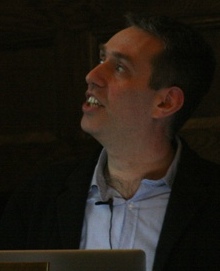 Professor Rueckert highlighted new methods for mapping the developing brain in a speech at the opening of the Evelina Newborn Imaging Centre on Monday 25 February. This new facility is part of the Centre for the Developing Brain, based at St Thomas’s Hospital, and will be where most of the subjects will be scanned over the duration of the project.

“If you think back twenty years, it wasn’t possible to take detailed MRI scans of children while they were still in the womb or if they were born prematurely. The techniques have been developed so that the children can be imaged in a safe environment, providing data to improve treatment and diagnosis.”

In total, the researchers aim to scan and interpret data from 1,500 children, starting from around 23 weeks of pregnancy through to the normal time of birth, and then to compare these data to the children’s abilities around two years after birth. It will provide further insight as to how children’s brains develop and how regions of their brains connect, and will show how conditions where brain connections are abnormal might form in a child.

“One of the unique parts of the project is not just to map the development but also to see what might go wrong during development.

“Hopefully the outcome of the project is that we’ll be able to spot problems earlier and therefore design and develop therapies for these babies.”

At the end of 2012, the European Research Council announced of €25 million of funding for innovative and important research projects at Imperial, which included two prestigious Synergy grants.