The latest announcement from CERN cementing the discovery of a Higgs boson at the Large Hadron Collider (LHC) represents a major milestone for particle physics and could herald a Nobel Prize for the scientists who originally hypothesised its existence and mechanism back in the 1960s. That work is often credited to six physicists including our own Emeritus Professor Tom Kibble, potentially giving the Nobel judging committee – who can only credit a maximum of three people – quite a headache.

Professor Kibble, who is very much still active at Imperial, recently celebrated his 80th birthday, which was marked by the College on 13 March with a symposium day, then evening public lecture with Professor Steven Weinberg of the University of Texas at Austin.

Professor Steven Weinberg, a Nobel laureate himself for work on the interactions of fundamental forces, is a friend and one-time Colleague of Professor Kibble’s. He spent a year at Imperial in the Theoretical Physics Group in 1961 working with Professor Kibble and the group’s founder Professor Abdus Salam.

As Professor Weinberg explained it was a particularly exciting time for particle physics, as scientists in the field were breaking ground through the discovery of symmetries at the at the very smallest scale of matter and energy.

“People have always been taken with symmetry — a human face, a butterfly with its wings extended — but what really interests the physicists, are not the symmetries of things but the symmetries of laws,” Professor Weinberg said at the lecture. “In essence symmetry is simply a statement of invariance; that something looks the same from different points of view.” 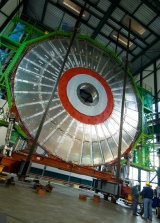 Finding evidence of these symmetries in practical experiments and real-world observations allows physicists to make predictions and inferences about fundamental forces and particles. For example the observation that the protons and neutrons that make up an atom’s nucleus are essentially just different versions of the same particle led to the postulation of the strong nuclear force.

“It’s a very platonic idea, that nature at a deep level is more beautiful and simple than appearances would suggest,” Professor Weinberg said, adding: “Like children we discovered a previously hidden cupboard filled by wonderful jars of jam.”

However, as Professor Weinberg explained, there was a catch. Physicists subsequently started to find that in certain scenarios those cherished symmetries could in fact be spontaneously broken. “When we opened the door of the cupboard, an alarm sounded; the jam was poisoned.”

But thankfully, the observation that symmetries can be broken led to a new era in theoretical physics and a spate of important discoveries. Indeed, such research led to the postulation of force-carrying particles such as the photon, which is responsible for the electromagnetic force, the W and Z bosons which carry the electroweak and ultimately the Higgs Boson which gives mass to fundamental particles.

The mechanism by which the Higgs does this was proposed in 1964 by three independent groups: Robert Brout and Francois Englert; Peter Higgs; and Gerald Guralnik, Carl Richard Hagen, and Tom Kibble, for which they were all awarded the J. J. Sakurai Prize for Theoretical Particle Physics in 2010.

“The name that has developed is the Higgs particle — although they could have called it the Brout-Englert-Guralnik-Hagen-Kibble-Higgs particle. Or from my point of view it could just have easily been called Kibble particle. But the name has stuck; Higgs has only one syllable,” said Professor Weinberg.

He went on to discuss the announcement by CERN of a ‘Higgs-like’ boson in July 2012 after particle-smashing experiments at the LHC.

“So far all of its properties agree with the properties predicted by the standard model, which is nice, but in a way disappointing; it would have been more exciting if it appeared as something entirely new and strange. I hope that the LHC is not doomed to simply verify the standard model over and over again, we all hope it will discoverer something quite new, like the particles that make up the dark matter that itself makes up five-sixths of the mass of the universe.”

That is a sentiment that Professor Kibble himself echoed in an interview afterwards.

“It would still be a remarkable achievement [to re-affirm the standard model of physics], but it would leave us not knowing where to go next. It is extremely unlikely that anyone would want to fund an even bigger accelerator to make a blind search of the higher-energy region.

“We need the LHC to give us at least a hint of where to look next. If the LHC doesn't come up with anything really novel, the best chance must lie in one of the astrophysical studies.  I do think the search for gravitational waves is a very promising possibility. It's also very possible that something exciting will turn up in one of the experiments searching for dark-matter particles.”

Professor Weinberg finished the lecture by paying tribute to Professor Kibble, as well as Professor Salam who passed away in 1996.

For the full lecture, see the video below.

Building on the 1964 papers, this paper of Tom's was instrumental in leading to the development of a unified theory of weak and electromagnetic interactions, for which Glashow, Salam and Weinberg shared the 1979 Nobel Prize for Physics. Indeed Kibble's work showed how the mathematics of group theory can be incorporated into the mechanism in such a way that what we now call the W and Z bosons become massive while the photon stays massless.

As Steven Weinberg described in his symposium speech: "In working out the electroweak theory ... at a certain point I discovered there was a massless particle in the theory and I said: 'Oh yes this is what Kibble said!' ... This was the realisation that the theory was not just a theory of weak interactions but a theory of weak and electromagnetic interactions."