Dr Will Knottenbelt collects an "SACA" award on behalf of Dr Alastair Donaldson, winner of the Best Teaching for Undergraduates award.

This year, Imperial College Union ran the first ever awards for academics and support staff, nominated and chosen entirely by students. The awards were designed to celebrate and reward good teaching and emphasise teaching as a skill of equal worth and value as research.

There were 557 nominations received for 251 candidates. The most popular category was for "Best Teaching for Undergraduates" which had 244 submissions and was won by Dr Alastair Donaldson here in the Department of Computing. Well done Alastair! 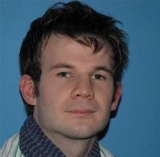 "Since I joined the Department of Computing in 2011 I've been constantly impressed by how bright, enthusiastic, questioning and hard working the undergraduate students are. It's a privilege to have the opportunity to talk to the undergraduates about my favourite topics - programming languages and software reliability - and I am hugely honoured to receive this praise of my lecturing skills from them - it really means a lot."

There were eight awards in total announced at the SACA Ceremony on 21 May in the Queen’s Tower Rooms. The event was attended by over 150 people from across Imperial, including senior College and Union staff and students.

Those shortlisted for the awards from the Department of Computing were:

Each of the shortlisted candidates recevied a certificate for being nominated, and the winner received an additional trophy as their award.

For more details of these awards see:

Students say 'thank you' at the Union's first ever staff awards