The MRC Centre for Outbreaks Analysis and Modelling joined eight other London-based MRC Centres to collaborate with both the Science Museum, and theatre company Non Zero One to deliver a three-day MRC Centenary Festival event entitled "Life: a healthy game of chance and choice".The festival launches the Centenary Open Week (20-27 June) to celebrate 100 years of life-changing discoveries from the MRC.

Over 1200 visitors attended the festival, each of whom were given the instruction to create an avatar (called a 'pal') which they could take around the event area.

Through participation in the games and activities hosted by each MRC centre, the visitors learned how chance and choice could impact the health of their 'pal'. 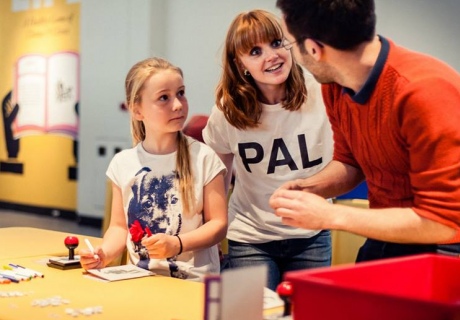 Using two activities developed specifically for the festival, the Centre for Outbreaks Analysis and Modelling demonstrated the concepts of disease transmission, vaccination, and the effect of herd immunity.

Once the journey through 'LIFE' was over, festival-goers entered the chat zone, where they could talk about what they had learned using a ‘talkaoke’ table. Researchers were also invited to participate in these chat sessions, either as experts or as members of the public.

Centre researchers, Dr Michael White and Dr Harriet Mills also gave a talk at the museum, "Voices, Viruses and Vaccinations" as a part of the corresponding lecture series.

Only a few of the 'pals' had been vaccinated against 'pal flu' so the first thing visitors were asked to do was to come and speak with Centre volunteers to find out if they were one of this lucky minority. Visitors who learned that their 'pals' were not vaccinated were then told that they were 'at risk' and that if anyone were to give them an infection sticker then they would become infected! 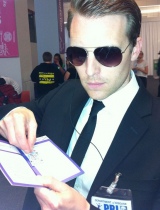 Non Zero One's character 'Agent Grimes' (pictured) was a key part of facilitating and sustaining the infection as he encouraged visitors with infection stickers to become his ‘Disease Agents’ and to seek out and infect one another.

Over the course of the event, hundreds of 'pals' were infected, and the path of subsequent tranmission was tracked and plotted to a giant network projection. As every infection sticker also had a unique four digit ID, visitors could identify their location in the outbreak. 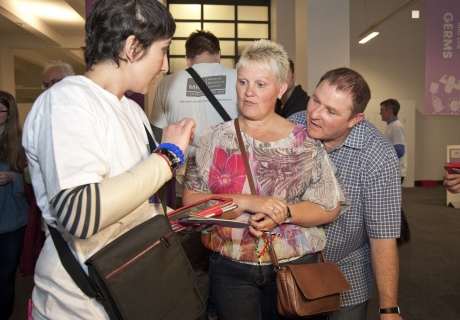 Our second activity took place out our stall, where visitors were encouraged to experiment with different disease scenarios, making decisions about how infectious the disease would be and how much of the population they'd like to vaccinate. 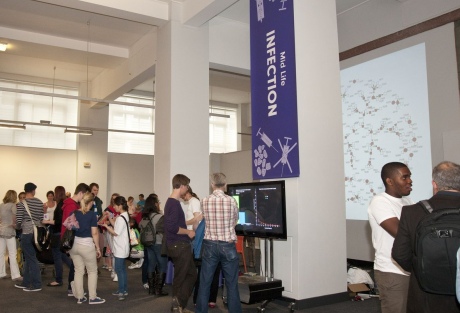 The simulation had balls bouncing around a screen to represent people moving around in a population. As ‘infected’ balls came into contact with unvaccinated balls their colour changed to indicate the infection passing between them. Visitors were able to compare the outcomes of each simulation, demonstrating the concept of conferred benefit from herd immunity against a disease. 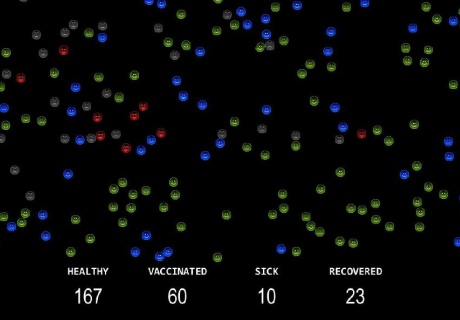 Science Museum visitors passed infection stickers (above) to eachother to simulate disease transmission. The barcodes on each sticker were scanned, allowing a giant video projection of the outbreak to be shown (see video link in main text)