You may have more in common with a pigeon than you realise, according to new research.

It shows that humans and birds have brains that are wired in a similar way.

A researcher from Imperial College London and his colleagues have developed for the first time a map of a typical bird brain, showing how different regions are connected together to process information. By comparing it to brain diagrams for different mammals such as humans, the team discovered that areas important for high-level cognition such as long-term memory and problem solving are wired up to other regions of the brain in a similar way. This is despite the fact that both mammal and bird brains have been evolving down separate paths over hundreds of millions of years. 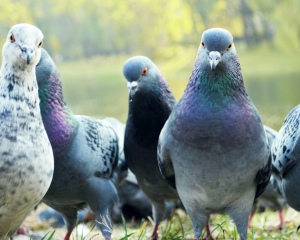 You and me, we have something in common

The team suggest that evolution has discovered a common blueprint for high-level cognition in brain development.

Birds have been shown in previous studies to possess a range of skills such as a capacity for complex social reasoning, an ability to problem solve and some have even demonstrated the capability to craft and use tools.

Professor Murray Shanahan, author of the study from the Department of Computing at Imperial College London, says:

“Birds have been evolving separately from mammals for around 300 million years, so it is hardly surprising that under a microscope the brain of a bird looks quite different from a mammal. Yet, birds have been shown to be remarkably intelligent in a similar way to mammals such as humans and monkeys. Our study demonstrates that by looking at brains that are least like our own, yet still capable of generating intelligent behaviour, we can determine the basic principles governing the way brains work.”

The team developed their map by analysing 34 studies of the anatomy of the pigeon brain, which is typical for a bird. They focussed on areas called ‘hub nodes’, which are regions of the brain that are major centres for processing information and are important for high level cognition.

In particular, they looked at the hippocampus, which is important for navigation and long-term memory in both birds and mammals. They found that these hub nodes had very dense connections to other parts of the brain in both kinds of animal, suggesting they function in a similar way.

They also compared the prefrontal cortex in mammals, which is important for complex thought such as decision making, with the nidopallium caudolaterale, which has a similar role in birds. They discovered that despite both hub nodes having evolved differently, the way they are wired up within the brain looks similar.

The long-term goal of the team is to use the information generated from the wiring diagram to build computer models that mimic the way that animal brains function, which would be used to control a robot.

The study was published this month in the Frontiers in Computational Neuroscience journal.