Alumnus Steve Ellis has designed and created a bicycle made for racing on ice.

Wind whooshes past his helmet-covered ears as he pumps his legs to pedal a device that looks like a cross between a bicycle and a yacht around a 400 meter ice rink.

The contraption, which Steve has dubbed Ice-Bat, is a new piece of sporting equipment of his own design. Functionally, it’s a bike that races on ice, suitable for people of all ages and for those with disabilities. But for Steve, an Imperial College London alumnus (BEng Mechanical Engineering 1991, MSc Aeronautics 1992), the Ice-Bat represents much more.

Steve’s sporting journey started at the age of eight when he began rowing. While his schoolmates were traveling by bike or walking, Steve would row up the river to school in Windsor.

As he grew older, his enthusiasm for rowing grew stronger. At the age of 18, Steve became a junior international in rowing for Great Britain.

It was Steve’s love for rowing that brought him to Imperial. “I love engineering, but I love sport as well,” Steve said. “Imperial ticked all boxes as it is great academically, and it has a great rowing facility.”

He then spent his university years diving into his passions. On the River Thames, Steve dedicated himself to improving his rowing skills with the Imperial College Boat Club. In 1992, his crew set a record at Henley that was only broken this year, at the Ladies' Challenge Plate. Steve then worked his way up to Boat Club Manager in 1995-96. In 1996 he went to the Atlanta Summer Olympics as lightweight reserve.

Off the water, Steve honed his mechanical engineering and composite materials skills. He completed his masters at Imperial in aeronautics in 1992.

The idea for the Ice-Bat

After his debut in the Summer Olympics, Steve took a job with Shell International and moved to the Netherlands. It was in there a country famous for its love of ice skating and cycling, that Steve learned to skate. He also developed an affection for cycling.

Then one cold, fateful day in winter 2010, Steve had an idea. 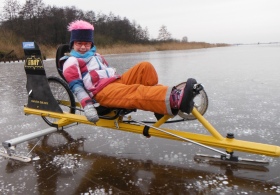 “I lived next to a canal in the Netherlands. In the winter, it freezes over. A few friends and I took our bikes out onto the frozen canal. Some of us made it, but one fell and broke his bike. During this experience, it crossed my mind that basically nobody has really tried to produce a serious bike for use on ice. I decided that I wanted to make one."

He named the device Ice-Bat, in part because of the big black carbon fibre propeller used in the bike’s original design and because it reminded him of the Batmobile from the comic book Batman. “The engineering and materials skills I learned at Imperial as well as sporting experience in rowing, cycling, and skating all come together nicely in this project,” Steve said.

His zeal for speed, sports and engineering has inspired Steve to continue to perfect the Ice-Bat over the last 3 years. The bike, which was designed to be easily ridden by everyone, including those with disabilities, has evolved from being powered by using a propeller to being powered using a bike wheel. The improvements in design mean that the Ice-Bat now travels at speeds up to 28 miles (45 km) per hour.

During this time, Steve has also expanded his knowledge of ice formation and ice skating. He has applied this to improving the Ice-Bat’s mechanics so riders can control the bike around 400 meter ice rinks. 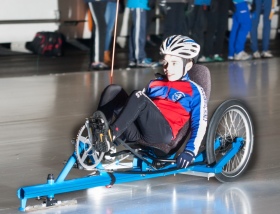 But Steve doesn’t just want the Ice-Bat to travel in circles at high speeds. He wants to see the bike inspire a whole new generation of sportsmen and women, by establishing a new sport - Ice Track Cycling. This is the name that Steve has given to the sport of Ice-Bat racing, which he hopes will become a Paralympic event in the 2022 Winter Olympics.

In the not-so-distant future, he hopes to win this year’s Dutch Sport Innovation Prize, a prestigious competition that judges entries on performance, benefits in terms of getting people to take part in sport, and economic and commercial value.

Regardless of whether he wins the competition, Steve is happy with the Ice-Bat. “Ice-Bats are not just about racing or winning prizes,” Steve said. “Touring round frozen lakes is a magnificent experience, and since these bikes are suitable for young and old, able and disabled alike, this experience is now in reach for those who cannot or choose not to skate.”

While it looks like there may be amazing opportunities on the horizon for Steve and his Ice-Bat, he says he would not be where he is at now without his eclectic collection of life experiences, both at Imperial and out on the water and ice. Steve advises students and graduates of Imperial to follow their passions and to get involved. 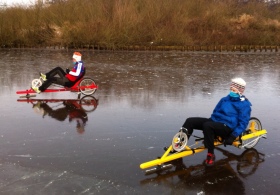 “When you take on a new project, you meet a lot of interesting people, and it’s a good ice breaker,” Steve said. “Once you find something to sink your teeth into, a thing you want to do, then go for it."

He also encourages students to be alert to opportunities that come their way. “When I look back, I didn’t really end up doing anything I was specifically trained to do. My career has been a result of taking opportunities that have come along,” Steve said. “My advice to current students and recent graduates is to keep your eyes and ears open, and you’ll be amazed.”

Information about the Dutch Sport Innovation Prize can be found at: http://www.sportinnovatieplatform.nl/nsip/.

The Ice-Bat is on display in the Science Museum’s Antenna Gallery from 29 – 31 October 2013, as part of an exhibition titled ‘How can bat sensors help blind people cycle?’

What do you do: I work 27 hours per week as Innovation Manager for a Dutch Cable and Telecom operator. The rest of the time I spend on sport and the Ice-Bat project.

Best Imperial memory: Living at Putney by the river; “Holt Villas”, next to the Imperial College Boathouse.

Hobbies: Rowing! Although now it is cycling and sailing as I physically I can’t really cope with rowing any more.

Best piece of advice for future alumni: I tried not to miss lectures and I never handed work in late, well nearly never! My advice is to do the same.

See the Ice-Bat in action