A new set of wheels for scientists to engage with public audiences about their research wins international recognition.

We may all be familiar with meals on wheels, but Imperial’s public engagement tricycle was designed to serve up something a little different when it was produced last year to grease the wheels of public engagement and give researchers a creative platform from which to demonstrate their research.

This novel approach has now been recognised with a gold medal from CASE (Council for Advancement and Support of Education) in its 2013 Circle of Excellence awards, one of two given to Imperial projects.

The judges, who came from higher education institutions across the US and Europe, commented: “This was hands-down favourite of all of the judges. The clean, simplistic design struck a chord with all of the designers on the panel and everyone wished they could see and experience it in person!” 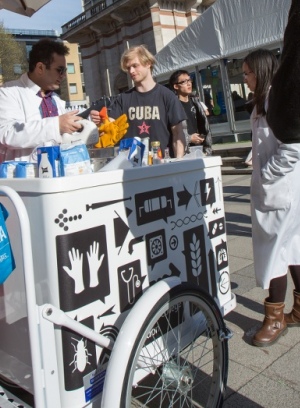 The tricycle in action at the Imperial Festival

Any judges who find themselves in SW7 in September may be in luck, as researchers will be taking to the streets around Imperial with the tricycle from 23 to 27 September as part of the Royal Borough of Kensington & Chelsea Celebration of Science. Scientific demonstrations will take place during the lunch hour and will include making elephant toothpaste, exploring solar sailing and revealing the science behind bubbles as well as opportunities to quiz soapbox scientists on scientific issues of the day.

The tricycle was originally commissioned from an ice cream vehicle manufacturer with support from the Wellcome Trust. It was designed to create a centre of attention for public events about research in the College’s Main Entrance, designed by Norman Foster, on Exhibition Road.

“Imperial enjoys the only publicly visible exhibition space on Exhibition Road, so we were keen to make good use of it with a programme of events to engage with passers-by,” says Natasha Martineau, Head of Research Communications at Imperial.

“The Main Entrance is a striking space, but we wanted to create something with more of a personal focus to it, to encourage people to drop in to our monthly Fringe events and find out more about the research that goes on at the College.

“Working with Imperial’s Creative Director Beth Elzer, we came up with the tricycle as a way of tempting people to come in and explore some of the more unexpected sides of science. It attracted a significant following at public events last year when it was used to demonstrate and provoke debate on a range of scientific issues, from cryogenics to how to make the perfect ice-cream.”

If you are a member of Imperial staff and would like to borrow the tricycle to engage public audiences about research, please contact Research Communications Assistant Michael Jones.

Judges said: “Imperial is a visually sophisticated magazine with a modern, lively look and feel. This thing is chock-full of really good design and editorial work.” 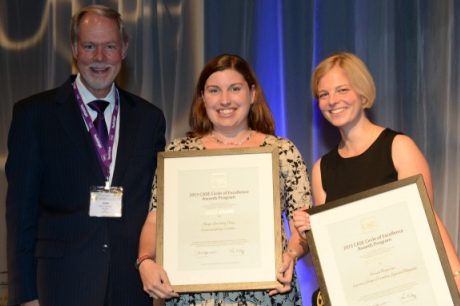 The Imperial projects were chosen from 2,900 entries from institutions around the world and were two of only 19 gold awards given. The awards were presented at the CASE Europe Annual Conference in Manchester.

Join ground-breaking researchers from Imperial College London for thought-provoking demos while you munch your lunch.  From liquid nitrogen ice-cream to solar sailing, the College’s brainboxes will be taking to the streets of South Kensington on the Imperial Pop-up Tricycle to dazzle and amaze as part of the Royal Borough of Kensington & Chelsea’s Celebration of Science. For a full schedule of where to find them and what they will be doing see: www.imperial.ac.uk/festival/fringe Find out what you're really made of at the Imperial Fringe

Fringe: a feast for the sciences Imperial Festival 2013