Imperial's main entrance on Exhibition Road lights up with an installation based on data from the Kepler space observatory.

Kepler was launched by NASA in 2009 to discover habitable planets by studying the flickering and pulsing of light from stars in our galaxy the Milky Way.

Now Imperial alumnus Dr Jon Rogers and colleagues are using this data to control the brightness of a series of light bulbs to create a light sculpture they call StarLight.

Currently a Senior Lecturer in Product Design at the University of Dundee, Rogers completed a PhD in Electrical and Electronic Engineering at Imperial in 2001.

“We want to give people a physical representation of the story of the exploration of space through light,” he said. “We think it’s really important that complex problems in science are made more tangible and accessible in ordinary formats.”

Turning data into something physical means that more people can access it in more ways.

The exhibit is an installation made up of 12 coloured lights. Each one is controlled by a different stream of data. The data streams have been sped up to more than 1,000 times their original speed so that people can see the lights flicker on a faster time scale.

“You only need to imagine our own solar system to understand why the dimming of a light bulb relates to the discovery of a planet”, Dr Rogers explains. “For example, if a telescope from a far-away planet were pointed at our Sun to collect a stream of data about it, every time a planet in our solar system passed in front of the Sun, the data stream would change.”

“The light level from each of the lamps is a representation of how the Kepler telescope would see the light from a far off star. We have picked stars with transiting planets which cause the light to dim each time a planet passes in front of it,” said Dr Rogers. 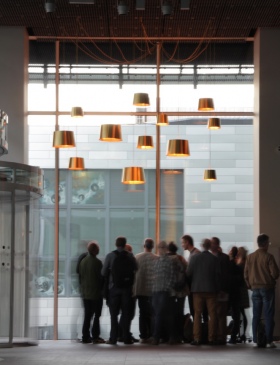 Rogers believes that projects like StarLight are important because they give people the opportunity to experience scientific discoveries without having to look at the data directly on a computer screen.

“Turning data into something physical means that more people can access it in more ways. Taking data from the screen and making it do things in the real world dramatically increases its potential impact,” said Dr Rogers. “Things that are far away or things that are lost in time are two physical barriers we simply can’t cross and we want to find an artistic and creative way to get around this.” 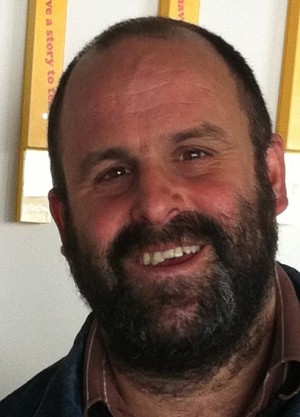 StarLight is a collaboration between the Swedish lighting manufacturer Wästberg and FieldGuide, a group co-founded by Dr Rogers for people interested in design, technology and society and the intersections where they overlap.

StarLight was installed as part of the Brompton Design District, a collaboration initiated by South Kensington Estates to bring together leading design shops, exhibition spaces, museums and institutions on and around London's Brompton Road during the London Design Festival.

Imperial College London is hosting StarLight as part of its programme of public events to encourage people to engage and interact with scientific research. The installation runs until 31 October, when visitors are invited to meet the artists over a drink at the next Imperial Fringe event - Your number's up - which focuses on big data.

StarLight will be on display in Imperial’s main entrance on Exhibition Road until 31 October 2013. Visitors are invited to meet the artists at the next Imperial Fringe, 17.00-20.00, 31 October.