European law could be unbearable for Croatia's brown bears Croatia joined the European Union on 1 July and conservation scientists fear that EU rules could cause problems for its brown bear population.

The country has been managing its brown bears as game animals, meaning they can be hunted; but under EU legislation, bears are a protected species and can only be shot if they are deemed to be problem animals.

“There is strong evidence that Croatia’s current system is beneficial for both local people and the bear population, and changing it could result in more tension between people and bears”

This might seem to be a positive outcome for the bears. However, it could lead to reduced tolerance for bears among local people, because the local economy will lose valuable revenue from hunting, according to a study by researchers from Imperial College London and Zagreb University. They argue that a system involving hunting ensures local support for bears in Croatia, which is vital in ensuring the animals’ long-term survival. It was a lack of local support for large carnivores, such as wolves and bears, that led to these animals disappearing from much of Europe in previous centuries.

Under the Croatian hunting system, 10 to 15 per cent of the total bear population can be killed each year, and individual hunting organisations receive the right to hunt a portion of this quota. These organisations sell the rights to shoot bears for trophies to hunters, which enables them to provide employment to local people, and to compensate farmers quickly for any bear damage. Under this system, the local economy has benefited and the bear population has remained stable.

In contrast, in neighbouring Slovenia, bears are protected under EU law. This means that local people gain little from their presence, and are less tolerant of them. Many bears are killed as problem animals, for damaging crops or endangering people and livestock. The researchers estimate that on average over the last five years, 20 per cent of Slovenia’s bear population has been killed each year, compared with around 8 per cent of the bear population in Croatia. 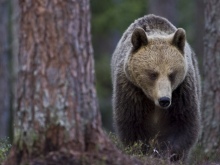 At present, trophy hunting for bears is still permitted in Croatia, under derogation from EU law, but the researchers are keen to see a more long-term solution.

Professor E.J. Milner-Gulland from the Department of Life Sciences, who led the research, said:

“Local hunting associations in Croatia currently have a positive relationship with the bears; the bear is accepted and valued by local communities. By contrast, many Slovenians have a negative attitude to bears, and we think this is because, unlike in Croatia, they see bears as nuisances rather than economically valuable and useful. If hunting was outlawed in Croatia, this would probably put a strain on the Croatians’ relationships with bears and could result in increased conflict between people and bears.”

According to Professor Milner-Gulland these issues suggest that there isn’t a one-size-fits-all solution to conservation policy and the EU needs to devolve more conservation decisions to the regional or local levels, because such policies need the consent of local people in order to be successful.

“There is strong evidence that Croatia’s current system is beneficial for both local people and the bear population, and changing it could result in more tension between people and bears,” said Professor Milner-Gulland. “We are not implying that trophy hunting is an appropriate management option for all brown bear populations. However, not every country is the same, and there needs to be regional variation in conservation policies so that people are able to manage their own populations of high priority species successfully.”

Much of the research for this study was carried out by Emma Knott as part of her MSc in Conservation Science at Imperial. The academic paper is published in the European Journal of Wildlife Research.

Funding for the research was provided by the European Commission, under the HUNT project of the Seventh Framework Program for Research and Technological Development. Professor Milner-Gulland has the support of a Royal Society Wolfson Research Merit award and the Croatian team was additionally supported by the Research Council of Norway.