Watch the video of Prince Harry's visit to Imperial.

The Centre is the first collaboration of its kind in the United Kingdom, where civilian engineers and scientists work alongside military doctors, supported by charitable funding to reduce the effects of roadside bombs and Improvised Explosive Devices (IEDs).

Scroll through the slideshow of Prince Harry’s tour of The Royal British Legion Centre for Blast Injury Studies at Imperial College London. 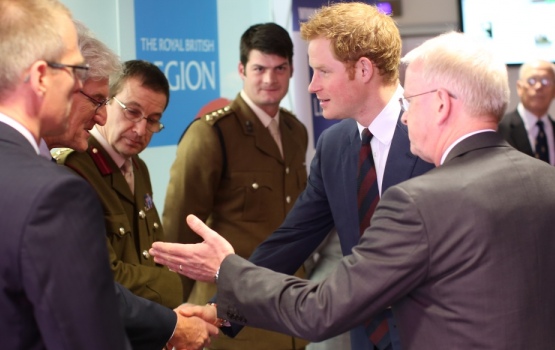 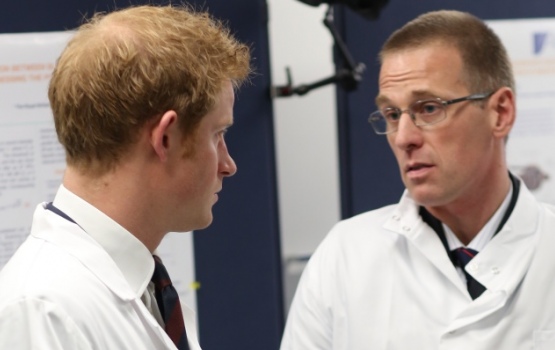 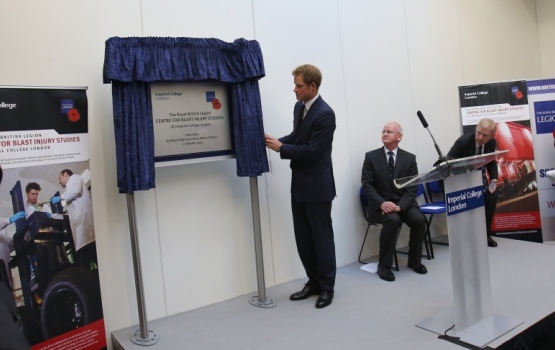 More than 400 UK military and civilian personnel have been killed in Afghanistan. Over 2000 people have been wounded in action, many from Improvised Explosive Devices (IEDs). During his tour of the Centre, Prince Harry visited a range of laboratories and spoke to researchers to learn more about the vital work being carried out to counteract the devastating effects of IEDs.

Before unveiling a plaque to commemorate the Centre’s official opening, His Royal Highness Prince Henry of Wales said: "Today, I have had a brief insight into the work of the Centre including how injured cells are analysed. In the past I've met numerous service men and women injured in operations, many by IEDs and landmines. Their stories are harrowing and inspirational as I am sure you all know. Watching the IED simulation reminded me of the catastrophic trauma experienced by the human body during IED or mine-strikes. To me this makes their extraordinary stories of recovery all the more outstanding. This issue affects people on a global scale and whilst work at the Centre is strongly focussed on military casualties, its findings will no doubt also provide significant humanitarian benefits across the world. The Royal British Legion and Imperial have joined forces to tackle this issue head on. Without this partnership the Centre would quite simply not become a reality."

Professor James Stirling, Provost of Imperial College London, said: “By drawing attention to this crucial area of research, Prince Harry does us a great service. Blast injuries afflict far too many armed service personnel and civilians, and this new Centre offers hope to current and future victims of war. We will be working with some of the world’s finest military personnel. When they are injured in conflict, they deserve the very best treatment. With this Centre, we will help give them exactly that.”

Professor Anthony Bull, Director of the Centre and Head of the Department of Bioengineering at the College, said: “We are extremely honoured to have Prince Harry here at Imperial to officially open the Centre. His tour of duties in Afghanistan puts him in a unique position of being able to understand how the work that we do at the Centre is improving the lives of those serving in our armed forces, and can potentially contribute to saving lives.”

The goals of the Centre are to increase understanding about blast injury patterns, improve treatments and recovery, and develop better ways of protecting those serving in current and future conflicts.

During his tour of the labs, Prince Harry spoke to Professor Sara Rankin, theme leader for biology and therapeutics at the Centre, and her colleague Dr William Proud who carries out research into blast force protection. They showed the royal visitor the Split Hopkinson Bar device, which simulates how shockwaves from roadside blasts affect people at the cellular level. Following a blast impact, patients with injuries can experience extremely painful side effects such as bone forming inside muscle tissue. The process is still poorly understood.

Drs James Wilgeroth and Theofano Eftaxiopoulous demonstrated to the Prince the shock tube device. This can simulate how blast shockwaves travel through the air. The force of these blasts can cause nerve damage and affect brain function. Understanding how shockwaves affect people will, say the researchers, enable better protective gear and treatments to be developed.

His Royal Highness also inspected the Anti-vehicle, Underbelly, Blast-Injury Simulator, better known to researchers at the Centre as AnUBIS, which was named after the ancient Egyptian god of the underworld. Carrying out research using AnUBIS enables academics to understand in more detail how roadside bomb blasts impact on the lower limbs, which could lead to better protective gear being developed in the future.

The Centre’s work is largely funded by the Royal British Legion and it complements their existing range of support for wounded, injured and sick serving men and women, as well as for ex-serving personnel and their families.

Chris Simpkins, Director General of The Royal British Legion, said: “It was an absolute privilege to have Prince Harry with us today at The Royal British Legion Centre for Blast Injury Studies. From his own experiences in the Armed Forces he will know only too well why the research undertaken at the centre is so vital. Our partnership with Imperial College London sits alongside the Legion’s commitment to the Defence Recovery Capability supporting all wounded, injured and sick Service personnel, and we are very proud to be providing £5million in funding for Imperial’s pioneering and world-class work in this field. We are making a long-term investment in the welfare of all who serve, enhancing the quality of life for the injured, while ensuring our Service men and women are better protected in the future and potentially reducing their long term need for support.”