Most solar cells used in homes and industry are made using thick layers of material to absorb sunlight, but have been limited in the past by relatively high costs. Many new, lower cost designs are limited as their layer of light-absorbing material is too thin to extract enough energy.

In new research, scientists have demonstrated that the efficiency of all solar panel designs could be improved by up to 22 per cent by covering their surface with aluminium studs that bend and trap light inside the absorbing layer.

At the microscopic level, the studs make the surface of the solar panels look similar to the interlocking building bricks played with by children across the world. 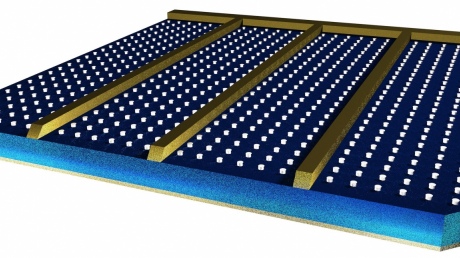 A solar panel with rows of aluminium studs and large electrical connections. The studs have been enlarged here but would normally be so small that they are invisible to the naked eye.

The study is published in the journal Scientific Reports by scientists from Imperial College London and international collaborators in Belgium, China and Japan.

"In recent years both the efficiency and cost of commercial solar panels have improved but they remain expensive compared to fossil fuels. As the absorbing material alone can make up half the cost of a solar panel our aim has been to reduce to a minimum the amount that is needed," said lead author Dr Nicholas Hylton from the Department of Physics at Imperial College London.

"The success of our technology, in combination with modern anti-reflection coatings, will take us a long way down the path towards highly efficient and thin solar cells that could be available at a competitive price."

The key to understanding these new results is in the way the internal structures of these metals interact with light.

Dr Hylton and his colleagues attached rows of aluminium cylinders just 100 nanometres across to the top of the solar panel, where they interact with passing light, causing individual light rays to change course. More energy is extracted from the light as the rays become effectively trapped inside the solar panel and travel for longer distances through its absorbing layer.

In the past scientists have tried to achieve the light bending effect using silver and gold studs because those materials are known to strongly interact with light, however these precious metals actually reduce the efficiency as they absorb some of the light before it enters the solar panel.

"The key to understanding these new results is in the way the internal structures of these metals interact with light. Gold and silver both have a strong effect on passing light rays, which can penetrate into the tiny studs and be absorbed, whereas aluminium has a different interaction and merely bends and scatters light as it travels past them into the solar cells."

An additional advantage to this solution is that aluminium is cheaper and far more abundant than silver and gold.

The future success of this technology opens up the possibility of making flexible solar panels that could be applied to any flat or curved surface, which could be used to power everything from domestic appliances to portable electronics like laptops.

The research was led by scientists from Imperial College London and involved partners from the University of Tokyo, IMEC and Soochow University in China. The research was funded by the European Commission under a FP7 project known as 'PRIMA – Plasmon Resonance for IMproving the Absorption of solar cells' (grant number 248154) as well as the Engineering and Physical Sciences Research Council UK (EPSRC), the Marie Curie fellowships scheme and the Leverhulme Trust. e.quinox secures funding to light up more homes in Rwanda this summer Solar Photovoltaics for off-grid electricity access in rural India Students win £10,000 for plan to create solar mobile phone charging business A 'quantum of sol' – how nanotechnology could hold the key to a solar-powered future