The STEM-studded line-up gathered a demo genius, Member of Parliament, bioengineer, professor of laughter, geologist, biochemist, comedian and tech enthusiast. An audience of over 500 people came to see the spectacle, including school groups. They enjoyed a drinks reception along with some science busking  and the 100 women 100 visions exhibit. 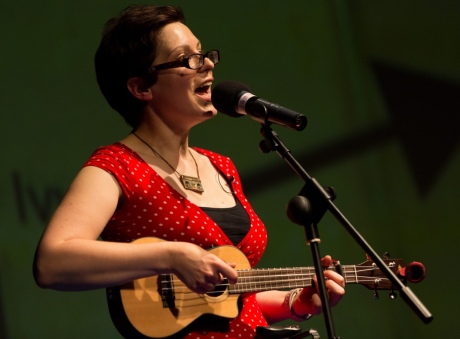 First to take the stage was science translator Fran Scott, someone who looks at science rather differently. After announcing her arrival by setting fire to butane with a Van der Graaf generator and a stick, Fran’s demos got increasingly more daring and reached a highpoint with the launching of home-made rockets using her tinfoil-covered witch’s finger (her finger covered in tin foil). 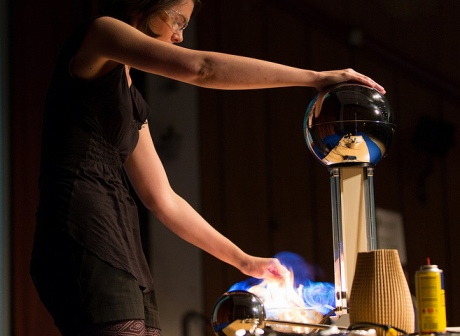 Imperial’s own bioengineer Professor Molly Stevens took us on a whistle stop tour through the history of biomaterials and their evolution – from the first baby steps with bioinert intraocular lenses to the current array of bioresorbable and bioactive biomaterials. She finishing by talking about her own research on the regeneration of bone using the periosteum (the membrane that covers the outer surface of our bones), and the surprising interest it has attracted from an American football team. 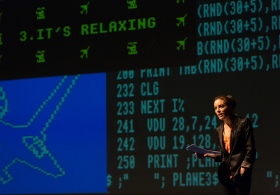 To Leila Johnston ‘interestingness is everything’ and as a consequence she never thought that her passion for technology was in any way unusual. She outlined her three reasons why women should do technology, namely, it is inherently interesting; we associate it with good things; and it can be calming and enjoyable.

The first half was concluded by Professor Sophie Scott making us laugh in the name of science. Her research into all matter relating to mirth is both amusing and fascinating at the same time; indeed we found out that laughter is an important social behaviour in all mammals. 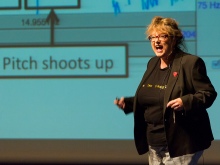 The second half event got underway with a cryogenically frozen love song by compere and Imperial Physics graduate Helen Arney.

Hazel Gibson, a geologist from Plymouth University then shared why she thinks rocks, minerals and fossils are amazing — not least because the diamonds sometimes found inside meteorites are the oldest thing that we will ever see apart from the stars. She encouraged us all to head to the Fossil Festival held annually in Lime Regis and highlighted pioneering palaeontologist Mary Anning and aspiring 5 year old fossil hunter Daisy Morris, who recently had a species of pterosaur named after her.

Dr Bernadette Byrne, a biochemist at Imperial spoke about the secret life of fat and how understanding this key building block of cells can help us investigate how phospholipids and integral membrane proteins work and the applications of the research for antihistamine treatments.

In an inspiring address Chi Onwurah, MP for Newcastle Central and shadow minister in the cabinet office rounded off a fantastic event. Chi, who studied Electrical Engineering at Imperial, spoke about her passion for engineering and politics (she joined the Labour Party at 16), and how she never saw a disparity between the two. She was saddened that the percentage of women studying Electrical Engineering from 1984 and 2013 had remained static at 12%. 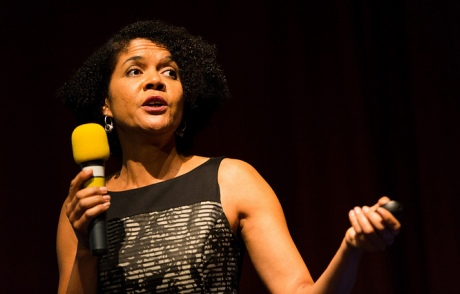 Chi encouraged us to promote more women in STEM because women have so much to offer ICT, engineering and science. Through her work as Shadow Science Minister Chi has personally questioned industry about the male to female ratios and from those that responded there was a real desire to improve the balance. STEM is a key part of our future and we need to understand it in order to improve that future.

All photography by Paul Clarke (http://paulclarke.com) Why did all these female role model come together? Ada Lovelace Day was created in 2009 by Suw Charman-Anderson motivated by the need to increase the profile of women in STEM (Science, Technology, Engineering and Maths) and create new role models to support girls in their study choices and women in their careers. It is named after Ada Lovelace, who is widely regarded as the first computer programmer. In the first year nearly 2,000 people blogged about women in science, technology, engineering and maths that they admired and the importance of the Women in STEM issue was recognised by widespread media coverage. The growth of Ada Lovelace Day, now an international celebration of women in STEM, has only been possible through the commitment and passion of the volunteers who organise it and partnership and collaborations that make it happen.

This year findingada.com has compiled a book, ‘A Passion for Science- Stories of Discovery and Invention’. The book is a collection of inspiring stories of how some of the most important breakthroughs in science and technology were achieved.