Last night's Imperial Fringe gave visitors a glimpse of some of the &apos;big data' research that powers much of modern science and technology.

Over 300 people turned up at the Halloween-themed event, called Your Number’s Up, to find out more about what Imperial is doing to address some of the challenges created by the ever-increasing amount of data being generated. Who owns it? Who can access it? How should it be stored and used?

The exhibits included demonstrations about ecology, finance, astronomy and assistive technology, and showed just how important big data has become in all our lives. It also explored the potential of ‘citizen science’, by testing out different ways of capturing data from visitors. 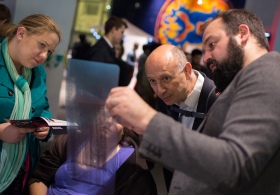 An exhibit from the Department of Electrical and Electronic Engineering presented technology to help improve image analysis in search and rescue drone missions. “The idea is that a human operator on the ground would sift through real-time aerial images looking for a missing person,” said researcher James Mardell. “What we need to know is how best to display those images to increase the chance of the operator spotting something.”

People were invited to spot differences between different kinds of images. Visitor Liam Lim said: “The principle behind this, how we as humans interpret and perceive images, is really interesting. And to actually be a part of that research is quite cool.”

Another example of ‘citizen science’ on show at the Fringe was the nationwide Open Air Laboratories (OPAL) project led by researchers at Imperial’s Centre for Environmental Policy. It encourages people to carry out nature surveys in their local parks and gardens, focusing on real problems such as tree pests and diseases.

“Today we just set up a game to get people identifying leaf shapes, but we have some survey packs for the field work.” said Dr Poppy Lakeman Fraser. “Of course there’s a strong element of fun with OPAL, but for school kids if they know they’re taking part in a real science experiment and their data is going to be used then there’s a reward and it brings it to life.”

For anyone who has ever been at the end of an unfavourable decision regarding a loan or credit application, there was an opportunity to reverse the tables and play bank manager. Participants were asked to score fictional credit applications, using simple mathematical models.

“There’s always a need for better predictive models to prevent the sort of events we saw in 2008 [due to the credit crunch]. But then you also don’t want to be rejecting applications out of hand, because that’s bad for growth and the economy,” said researcher Dr Badr Missaoui from Imperial’s Department of Mathematics. 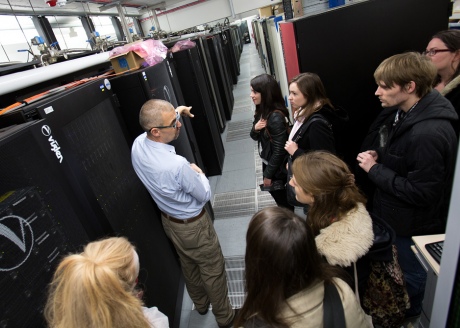 Visitors were also given a tour of Imperial's computing facilities, where data is stored and analysed

One Fringe visitor who knows a lot about the workings of the economy was Toby Sibley, Project Manager at the Bank of England. He came looking for inspiration from different areas of science and found the cloud computing techniques used in flood modelling particularly interesting.

“I’m doing some work around big data at the moment, so tonight was really about coming along and seeing what’s cutting edge, and trying to work out if there are any common approaches to the big data problem,” he said.

Visitors had the chance to play the classic ‘Pong’ arcade game, but using only the direction of their gaze to control the on-screen paddles. 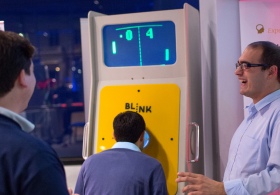 “It’s quite challenging at first, because you’re used to playing games with your hands. But actually it’s very intuitive, and could really help people with limited movement,” said visitor Roland Wardle.

There was also a prototype face recognition system where participants could virtually transplant their faces with those of celebrities and even their friends at the event. The technology works by rapidly identifying key landmarks on the participant’s face then accurately superimposing the avatar’s face, so that it creases and responds to facial expressions and small movements.

“We have a database of roughly 10,000 images, so that’s 10,000 different faces, all landmarked, and classified; it’s been more than a year’s worth of hard work,” said Dr Akshay Asthana from Imperial’s Department of Computing. “The technology is improving all the time and has all sorts of potential applications in social media and gaming for example.” 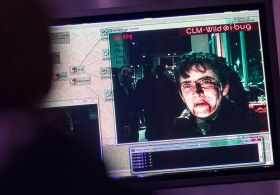 The evening came to a close with a performance from dance company Combination, which explored how cancer develops as a result of errors in our DNA data, and the real life impact that can have on patients and their family.

For many visitors at the Fringe, it was clear that they’d never look at data in quite the same way again. 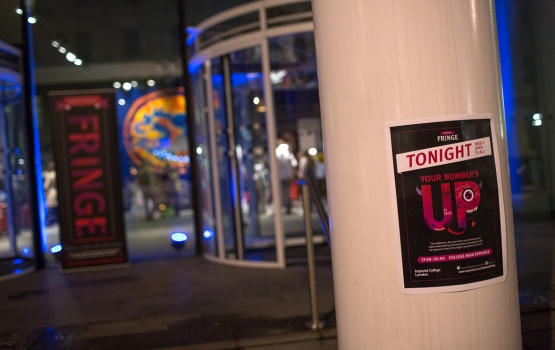 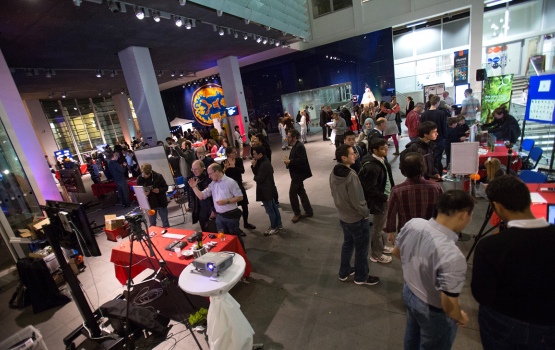 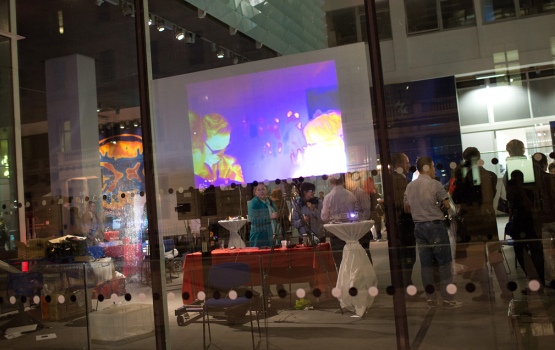 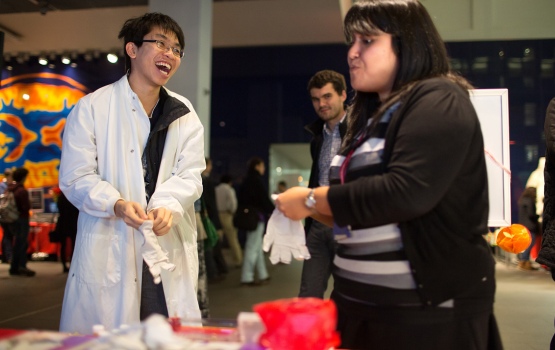 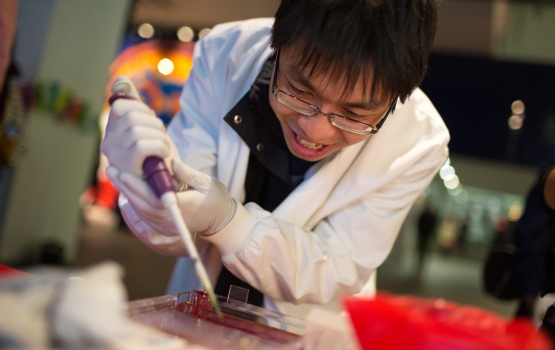 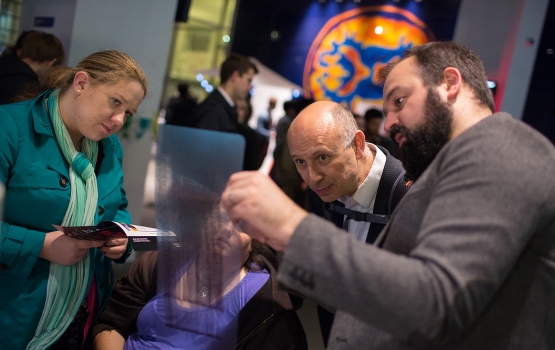 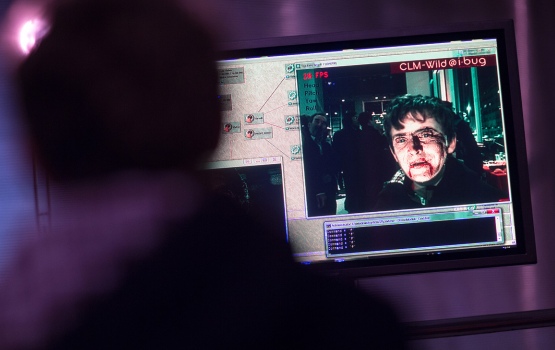 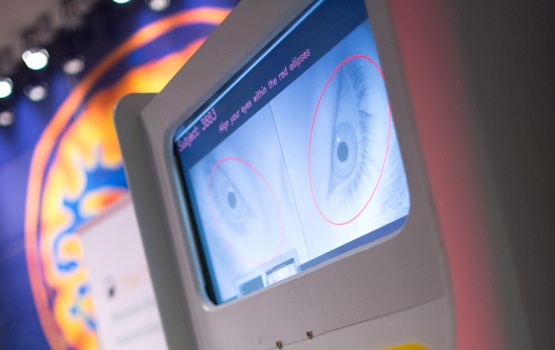 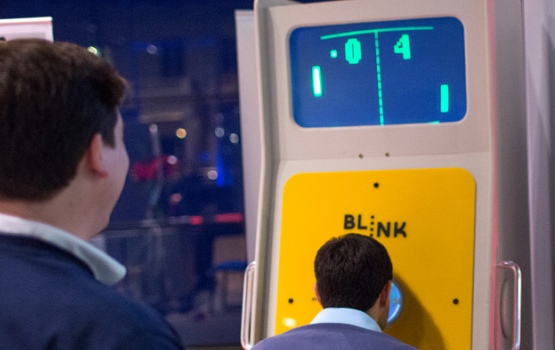 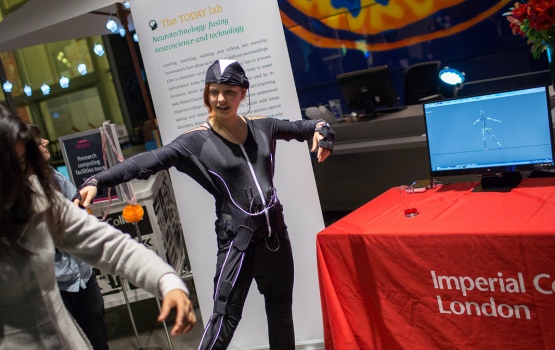 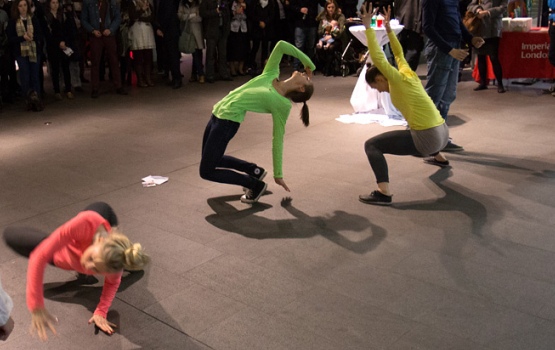