The Global Diffusion of Healthcare Innovation Spreading new ideas in healthcare requires governments and healthcare organisations to set out a clear vision of what can be achieved, establish standards and eliminate old ways of working – yet most countries are not delivering on these measures, according to a ground-breaking study. 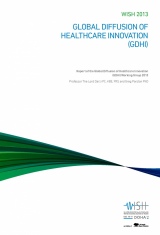 The Global Diffusion of Innovation report identifies for the first time the factors that speed the uptake of advances in healthcare. All health services need to change to cope with ageing populations and rising costs but while creative solutions are needed, just as important are ways of fostering the rapid adoption of these solutions, it says.

The report found that winning the hearts and minds of front line staff and patients was key. Countries were in general good at identifying champions of change, engaging patients and addressing clinicians’ concerns.

But seven out of the eight in which the research was conducted were poor at eliminating old ways of working, adapting innovations to the local context and creating time and space for learning.

In Australia, Brazil, England, India, South Africa, Spain and the United States there was a gap between what experts said was important for the dissemination of new ideas and what existed in their own country. Only in Qatar, a new and rapidly expanding economy, did the reality match the experts’ ratings.

The gap was largest in England and Spain, where the lack of funding for research, development and diffusion of new ideas was seen as a major drawback. In Australia, Brazil and South Africa, incentives and rewards for spreading innovation were seen as inadequate. In the US and India there was a small but consistent gap between the experts’ assessment and the reality.

The ground-breaking study was led by the Qatar Foundation and will be launched at the World Innovation Summit for Health in Doha on 11 December 2013. It is the first time researchers have attempted to chart the conditions that foster the spread of health innovations around the world.

It found different spurs to innovation were favoured in different countries. In the insurance-based health system in the US experts said incentives and rewards linked to the payment system played an important role, while in England’s publicly-funded National Health Service standards and protocols were key.

But the experts agreed that one factor – winning the hearts and minds of those on the front line – was critical to the spread of new ideas and ways of working.

“Health services everywhere have to change to cope with ageing populations, the growing burden of chronic disease and economic pressures. We need creative answers to these problems but even more importantly we need to learn how to spread them so they are rapidly taken up. It simply takes too long at present for new ideas to become common practice,” said Lord Darzi, executive chair of the World Innovation Summit for Health (WISH) in Doha, Qatar, and chair of the Institute for Global Healthcare Innovation at Imperial College, London, UK.

Greg Parston, chief author of the study, to be launched at the summit, said: “The good news is that, regardless of what countries are doing at the national level, there is great consistency among healthcare organisations in terms of the effort they put into identifying champions, engaging patients and addressing clinicians’ concerns at the front line. Where they need to do a lot of work is in eliminating old ways of working, adapting innovations to suit the local context and creating time and space for learning.”

Experts in all countries said that IT capability was critical to the spread of new ideas and had been especially important in the emerging economies of Brazil, India and South Africa.

Governments should also consider allocating specific resources to spread innovation and maintain a sense of openness and interest in new ways of working on the front line of care.

“As ultimate users of new products and procedures, and as gatekeepers to patients and the public, professionals at the front line of delivery are seen as having the power to make or break the spread of an innovation,” the report says.

The factors that experts rate as most important in spreading innovation in the last five years vary widely across countries  - but much can be learnt from their experience, the report says.

Examples of innovations successfully spread include:

In Australia the cervical cancer vaccine quickly became routine once it was demonstrated to be effective, thanks to effective sharing of data on its success.

In Brazil a Young Scientist Award has been established as a result of a partnership between state institutions and private industry to identify new talents and boost research.

In India, new technology has given front line workers the ability to perform nine basic health care checks in rural areas at low cost through the use of a Bluetooth-enabled kit.

In Qatar, the development of a five year National Cancer Strategy, launched in May 2011, is being overseen by a national committee of senior health leaders and public and patient representatives and has won wide support.

In South Africa, mobile phone company Vodacom is working with 800 community care workers and 50 clinics to enable them to upload patient information via their mobile phones, saving paperwork and allowing more time for front-line care.

In the United States, the introduction of Patient Centred Medical Home programmes, where payments are based on outcomes and emphasise care co-ordination across medical and social services, are gaining in popularity.

The major drivers of innovation identified by the experts in the eight countries as likely to foster the spread of innovation over the next five years are:

1 Developments in mobile phone technology to enable the sharing of information and access to health records.

3 The release of specific resources to encourage the development of networks linking research and clinical practitioners.

4 Recognition of the need for professional leadership and the development of an innovation culture among front line workers.