Dino fossils unearthed at school with help from Imperial researcher

Dinosaur fossils have been unearthed by an Imperial researcher and students from Ardingly College.

Dr Susannah Maidment from Imperial and students from Ardingly College in West Sussex have discovered fossilised dinosaur bones, fish teeth, scales, plants and shells. These remains are from creatures that lived on Earth and in the sea approximately 140 million years ago.

The fossils were found while builders were excavating rubble from under a new boarding house, Godwin Hall, which was completed last year.

The pupils are going to be further examining this fossil rich layer to figure out what sort of animals were living in West Sussex 140 million years ago.

The school is now working with the Dr Maidment to find more fossilised creatures from our ancient past.

Dr Maidment, Junior Research Fellow from the Department of Earth Science and Engineering at Imperial College London, said: “We know that Ardingly College sits on a rocky treasure trove of ancient fossils. The problem is we do not usually get access to them because this area of England is so heavily urbanised. The discovery of these fossils are rare.The pupils are going to be further examining this fossil rich layer to figure out what sort of animals were living in West Sussex 140 million years ago. We expect to find ancient fish, crocodiles, and more dinosaur bones.

It was Ardingly’s chemistry technician, Brian Craik-Smith, a trained geologist, who first made the discovery. He said: “After Godwin Hall was built I thought I’d do a geo-trail for our students during our school’s ArtsFest last June. 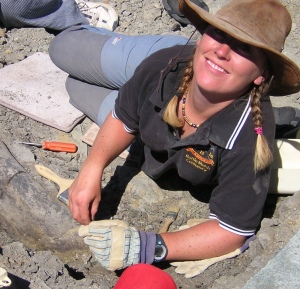 “In the rocks in the excavated rubble we saw many freshwater snails, bivalves and plant remains. Later that year I also found several bones, believed to be from a dinosaur and a turtle that are 130 or 140 million years old. Since then we have found more rocks with teeth, scales and bone fragments.”

Dr Jane Blythe, the school’s Head of Biology, said: “Uncovering dinosaur remains just a stone’s throw from our biology labs has presented a unique and exciting opportunity for our students to experience first-hand the thrill and excitement of scientific discovery in its truest form.

“I feel very privileged to be working alongside Brian, our resident fossil-hunter, who initially discovered the remains, and to have such expert help and advice from Dr Maidment from Imperial College London."

In the coming weeks, Ardingly villagers are to be invited to join a ‘Dig for Dinosaurs’ at the school as part of a Citizen Science Project. Locals will also be asked to bring along their own finds, so that experts can help identify them. The aim is to collect, catalogue and curate as many items as possible, so that a new national fossil bank can be established as a resource for learning more about the early Cretaceous period, the heyday of the dinosaur.