New research indicates that obesity in the general population may be genetically linked to how our bodies digest carbohydrates.

Published today in the journal Nature Genetics, the study investigated the relationship between body weight and a gene called AMY1, which is responsible for an enzyme present in our saliva known as salivary amylase. This enzyme is the first to be encountered by food when it enters the mouth, and it begins the process of starch digestion that then continues in the gut.

People usually have two copies of each gene, but in some regions of our DNA there can be variability in the number of copies a person carries, which is known as copy number variation. The number of copies of AMY1 can be highly variable between people, and it is believed that higher numbers of copies of the salivary amylase gene have evolved in response to a shift towards diets containing more starch since prehistoric times.

Researchers from Imperial College London, in collaboration with other international institutions, looked at the number of copies of the gene AMY1 present in the DNA of thousands of people from the UK, France, Sweden and Singapore. They found that people who carried a low number of copies of the salivary amylase gene were at greater risk of obesity.

The chance of being obese for people with less than four copies of the AMY1 gene was approximately eight times higher than in those with more than nine copies of this gene. The researchers estimated that with every additional copy of the salivary amylase gene there was approximately a 20 per cent decrease in the odds of becoming obese. 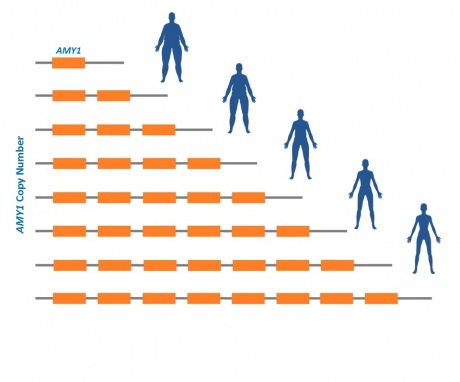 Professor Philippe Froguel, Chair in Genomic Medicine in the School of Public Health at Imperial College London, and one of the lead authors on the study, said: “I think this is an important discovery because it suggests that how we digest starch and how the end products from the digestion of complex carbohydrates behave in the gut could be important factors in the risk of obesity. Future research is needed to understand whether or not altering the digestion of starchy food might improve someone’s ability to lose weight, or prevent a person from becoming obese. We are also interested in whether there is a link between this genetic variation and people’s risk of other metabolic disorders such as diabetes, as people with a low number of copies of the salivary amylase gene may also be glucose intolerant.”

Dr Mario Falchi, also from Imperial’s School of Public Health and first author of the study, said: “Previous genetic studies investigating obesity have tended to identify variations in genes that act in the brain and often result in differences in appetite, whereas our finding is related to how the body physically handles digestion of carbohydrates. We are now starting to develop a clearer picture of a combination of genetic factors affecting psychological and metabolic processes that contribute to people’s chances of becoming obese. This should ultimately help us to find better ways of tackling obesity.”

Dr Julia El-Sayed Moustafa, another lead author from Imperial’s School of Public Health, said: “Previous studies have found rare genetic variations causing extreme forms of obesity, but because they occur in only a small number of people, they explained very little of the differences in body weight we see in the population. On the other hand, research on more common genetic variations that increase risk of obesity in the general population have so far generally found only a modest effect on obesity risk. This study is novel in that it identifies a genetic variation that is both common and has a relatively large effect on the risk of obesity in the general population. The number of copies of the salivary amylase gene is highly variable between people, and so, given this finding, can potentially have a large impact on our individual risk of obesity."

The first step of the study involved the analysis of genetic data from a Swedish family sample of 481 participants, recruited on the basis of sibling-pairs where one was obese and the other non-obese. The researchers used these data to short-list genes whose copy number differences influence body mass index (BMI), and identified the gene coding for the enzyme salivary amylase (AMY1) as the one with the greatest influence on body weight in their analysis. They then investigated the relationship between the number of times the AMY1 gene was repeated on chromosome 1 in each individual and their risk of obesity, by studying approximately 5,000 subjects from France and the UK.

The researchers also expanded their study to include approximately 700 obese and normal-weight people from Singapore, and demonstrated that the same relationship between the number of copies of the AMY1 gene and the risk of obesity also existed in non-Europeans.

The study was funded by the Wellcome Trust and the Medical Research Council. News Scientist: Obesity linked to our ability to digest carbohydrates