A new discovery suggests it could one day be possible to chemically reprogram and repair damaged nerves after spinal cord injury or brain trauma.

Researchers from Imperial College London and the Hertie Institute, University of Tuebingen have identified a possible mechanism for re-growing damaged nerve fibres in the central nervous system (CNS). This damage is currently irreparable, often leaving those who suffer spinal cord injury, stroke or brain trauma with serious impairments like loss of sensation and permanent paralysis.

Published in Nature Communications, the research highlights the role of a protein called P300/CBP-associated factor (PCAF), which appears to be essential for the series of chemical and genetic events that allow nerves to regenerate. Regenerating nerve fibres is one of the best hopes for those suffering from CNS damage to recover.

When researchers injected PCAF into mice with damage to their central nervous system, this significantly increased the number of nerve fibres that grew back, indicating that it may be possible to chemically control the regeneration of nerves in the CNS.

“The results suggest that we may be able to target specific chemical changes to enhance the growth of nerves after injury to the central nervous system,” said lead study author Professor Simone Di Giovanni, from Imperial College London’s Department of Medicine. “The ultimate goal could be to develop a pharmaceutical method to trigger the nerves to grow and repair and to see some level of recovery in patients. We are excited about the potential of this work but the findings are preliminary.

“The next step is to see whether we can bring about some form of recovery of movement and function in mice after we have stimulated nerve growth through the mechanism we have identified. If this is successful, then there could be a move towards developing a drug and running clinical trials with people. We hope that our new work could one day help people to recover feeling and movement, but there are many hurdles to overcome first,” he added.

The researchers were interested in understanding how axons in the peripheral nervous system (PNS) make a vigorous effort to grow back when they are damaged, whereas CNS axons mount little or no effort. If damage occurs in the peripheral nervous system, which controls areas outside of the brain and spinal cord, about 30% of the nerves grow back and there is often recovery of movement and function.  The researchers wanted to explore whether it was possible to generate a similar response in the CNS.

Co-author Dr Radhika Puttagunta from the University of Tuebingen said: “With this work we add another level of understanding into the specific mechanisms of how the body is able to regenerate in the PNS and have used this knowledge to drive regeneration where it is lacking in the CNS.  We believe this will help further our understanding of mechanisms that could enhance regeneration and physical recovery after CNS injury.”

To investigate the differences between how the two systems respond to damage, the researchers looked at mouse models and cells in culture. They compared the responses to PNS damage and CNS damage in a type of neuron called a dorsal root ganglion, which connects to both the CNS and the PNS. 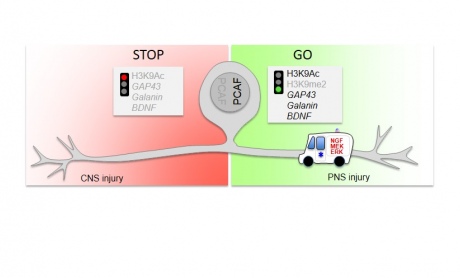 They found that epigenetic mechanisms were at the core of this capacity to regenerate. Epigenetic mechanisms are processes that, without altering our DNA, manage to activate or deactivate genes in response to the environment. They normally take the form of chemical reactions and have been shown to control how genes influence diseases such as cancer and diabetes. However this is the first demonstration of a specific epigenetic mechanism responsible for nerve regeneration.

When nerves are damaged in the PNS, the damaged nerves send ‘retrograde’ signals back to the cell body to switch on an epigenetic program to initiate nerve growth. Very little was previously known about the mechanism which allows this ‘switching on’ to occur.

The researchers identified the sequence of chemical events that lead to the ‘switching on’ of the program to initiate nerve regrowth and pinpointed the protein PCAF as being central to the process. Furthermore when they injected PCAF into mice with damage to their central nervous system, there was a significant increase in the number of nerve fibres that grew back.