Imperial celebrated some of its longest serving employees this week, at an event for staff who had reached 35, 40, 45 and 50 years of service in 2013.

The long-serving staff members, with more than 1,400 years of collective experience at Imperial, were congratulated by President & Rector, Sir Keith O’Nions, at a reception held on Tuesday 8 April.

Speaking at the event, Sir Keith said: “Over your time at Imperial you will have witnessed and been part of remarkable changes both in the size, make-up and appearance of the College. However, the professionalism, excellence and confidence that has defined the Imperial community over generations remains fully intact. This continuity is because of people like you, and your exceptional contributions to the College. I am delighted to be able to celebrate you commitment to Imperial at this very special occasion” 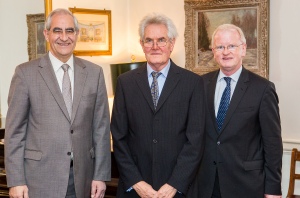 Dr Alexander Hewson has worked in the Department of Mathematics for 50 years. Speaking of the changes he had witnessed at Imperial, he said: “When I first arrived at the College, we would have to sit in the library working slowly though papers, or carry large bound journals to and from the photocopiers.

"Now that everything is available digitally, research moves at a completely different pace. Papers can be uploaded online and viewed by people across the world in seconds. It also means that there is a lot more international collaboration now. I work closely with a Japanese group for instance, as well as former students in Germany and the USA– something that would have been almost impossible 50 years ago.” 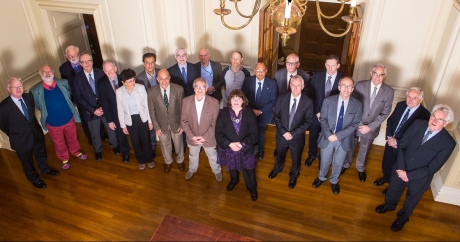 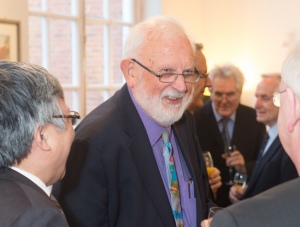 Emeritus Professor Robert Spence, former Head of the Department of Electrical and Electronic Engineering, was the longest serving member of the group, celebrating 51 years of service to Imperial. We caught up with him to reminisce about his time at the College so far.

Do you have any particular highlights from your time at Imperial?

My research interests centre on electronic circuit design and, in 1974, my colleagues and I developed MINNIE – the first computer aided design system for electronic circuits that allowed you to draw a circuit on the screen with a ‘light-pen’. When we were playing around with it, we realised that it would be really useful to have a calculator on the screen – so we developed one. Now this feature is common-place, but ours was thought to be the world’s first (See video, left, at 5:34).

For many years I was also involved with what used to be Imperial’s TV studio, where I helped put together countless videos illustrating Imperial research with Colin Grimshaw – who now runs the College’s Video Archive Blog. We had a lot of fun.

One video that stands out is an 'envisionment' video we made in 1994 to predict what the future of engineering design would look like. The film was set at a dinner party taking place in the year 2020AD and we got actors to play the parts of eminent engineers explaining their approach to engineering design to a journalist. It’s strange to look back on it now – quite a few of the predictions have been realised, and there is still time left for the others.

What is your most memorable moment at the College?

It's impossible to pick just one, but some that really stand out revolve around the Royal Academy of Engineering’s New Fellows Dinner. The first time I was invited I decided that I couldn’t turn up to such an important event in anything as boring as a taxi. So I, along with some colleagues, borrowed Boanerges, the 1902 James and Browne town car belonging to the City and Guilds College Union, and got driven to the dinner in style. 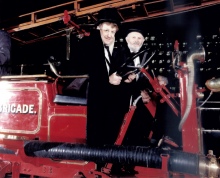 We’d set a precedent then, so we had to keep it up. One year we took Jezebel – the Royal College of Science Union’s vintage fire engine (pictured left). It sounded like a great idea at the time, but it very nearly ended in disaster. We all piled in – ten fellows in top hats and coats – and bunched up precariously onto two very narrow benches. The only means of support were the metal poles that we had to hold onto.  I didn’t think it looked very safe, but thought ‘never mind, it will be fun’. Ten minutes later we were hurtling down the road at over 40mph, clinging onto those poles for dear life and trying not to go flying out of the vehicle. I could just see the headlines! Thankfully we all made it there in one piece.

What has made you stick around at Imperial for so long?

I've always said that if something is fun, it’s worth doing - and I've certainly had a lot of fun over the past 51 years.  Imperial has always had a fantastic community, and it boasts some exceptional students. They are the reason I continued to teach after my retirement – I never tire of working with them.

Finally, this photo shows you flipping burgers on the Queen’s Lawn. What is going on? 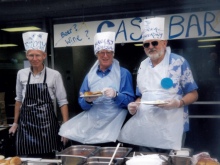 It was taken at a staff barbeque hosted by Lord Oxburgh, the Rector at the time, where he required all Heads of Departments to cook for the rest of the College community.

Cooking burgers wasn’t my area of expertise, so I asked Lord Oxburgh how I would know when they were done. He told me to hit them with the spatula - and that if they bounced, they were cooked. I wasn’t convinced but thought ‘if the Rector says it, we’d best go with that’.