Study suggests more patients with emphysema could benefit from surgery A procedure called lung volume reduction surgery could be performed effectively in more patients, according to new research.

Chronic obstructive pulmonary disease (COPD) is a combination of emphysema (damage to the air sacs of the lungs) and chronic bronchitis. It affects more than a million people in the UK and is a major cause of disability and premature death.

In some patients, surgeons can perform a procedure called lung volume reduction surgery, which removes the most damaged area of the lung enabling the remaining parts of the lung to work more effectively. Clinical trials have shown that this reduces breathlessness and improves exercise capacity and survival. Despite these potential benefits, fewer than 100 operations are performed per year because of historical concerns about risks.

Researchers from Imperial College London showed that in a series of 81 patients who had undergone the procedure there were no deaths and only six per cent were still in hospital a month after the operation. The study was published in the journal Clinical Medicine.

Lead author of the study Dr Nicholas Hopkinson from Imperial's National Heart and Lung Institute said: "There is a strong evidence base for the benefits of lung volume reduction surgery in carefully selected patients with COPD. There are thousands more people with lung disease in the UK who could profit from this approach. These results suggest that concerns about the risks of surgery have been exaggerated and doctors looking after patients with COPD should be encouraged to identify people eligible for this procedure."

The researchers reviewed outcomes for patients who had undergone lung volume reduction procedures at Royal Brompton & Harefield NHS Foundation Trust between 2000 and 2012. Surgeons had performed unilateral lung volume reduction surgery on 81 patients. None of these patients had died within 90 days and only six per cent were still in hospital one month later. Other treatments include stopping smoking, exercise programs and inhaled medications, but many people with the condition remain extremely breathless and disabled. 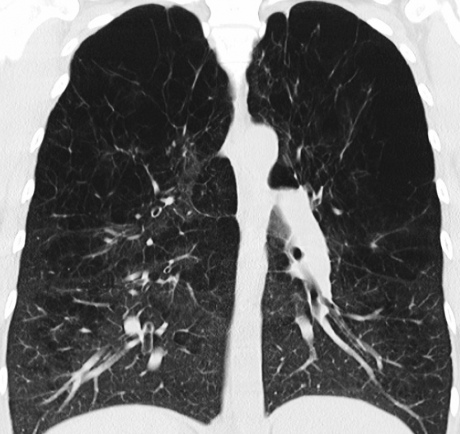 Lung volume reduction surgery can only be performed on carefully selected patients who have severe emphysema restricted to one part of the lung. Many of the patients who fall into this category could be missing out on an effective treatment. The researchers speculate this could be due to perceptions amongst clinicians that the procedure has a higher rate of mortality than is the case.

These perceptions could be based on historical trials when the procedure involved incision through the sternum and both lungs were operated on. Since this time the procedure has been refined so that the incision is performed through the side of the chest between the ribs, with only the worst lung targeted, which involves less trauma and fewer complications.