Imperial physicists have discovered how to create matter from light - a feat thought impossible when the idea was first theorised 80 years ago.

In just one day over several cups of coffee in a tiny office in Imperial’s Blackett Physics Laboratory, three physicists worked out a relatively simple way to physically prove a theory first devised by scientists Breit and Wheeler in 1934.

Breit and Wheeler suggested that it should be possible to turn light into matter by smashing together only two particles of light (photons), to create an electron and a positron – the simplest method of turning light into matter ever predicted. The calculation was found to be theoretically sound but Breit and Wheeler said that they never expected anybody to physically demonstrate their prediction. It has never been observed in the laboratory and past experiments to test it have required the addition of massive high-energy particles.

What was so surprising to us was the discovery of how we can create matter directly from light using the technology that we have today in the UK.

The new research, published in Nature Photonics, shows for the first time how Breit and Wheeler’s theory could be proven in practice. This ‘photon-photon collider’, which would convert light directly into matter using technology that is already available, would be a new type of high-energy physics experiment. This experiment would recreate a process that was important in the first 100 seconds of the universe and that is also seen in gamma ray bursts, which are the biggest explosions in the universe and one of physics’ greatest unsolved mysteries.

The scientists had been investigating unrelated problems in fusion energy when they realised what they were working on could be applied to the Breit-Wheeler theory. The breakthrough was achieved in collaboration with a fellow theoretical physicist from the Max Planck Institute for Nuclear Physics, who happened to be visiting Imperial.

Demonstrating the Breit-Wheeler theory would provide the final jigsaw piece of a physics puzzle which describes the simplest ways in which light and matter interact (see image). The six other pieces in that puzzle, including Dirac’s 1930 theory on the annihilation of electrons and positrons and Einstein’s 1905 theory on the photoelectric effect, are all associated with Nobel Prize-winning research (see image).

Professor Steve Rose from the Department of Physics at Imperial College London said: “Despite all physicists accepting the theory to be true, when Breit and Wheeler first proposed the theory, they said that they never expected it be shown in the laboratory. Today, nearly 80 years later, we prove them wrong. What was so surprising to us was the discovery of how we can create matter directly from light using the technology that we have today in the UK. As we are theorists we are now talking to others who can use our ideas to undertake this landmark experiment.” 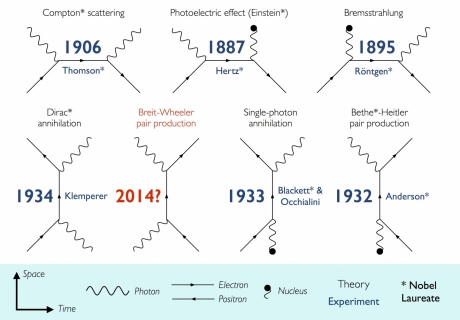 Within a few hours of looking for applications of hohlraums outside their traditional role in fusion energy research, we were astonished to find they provided the perfect conditions for creating a photon collider. The race to carry out and complete the experiment is on!

The collider experiment that the scientists have proposed involves two key steps. First, the scientists would use an extremely powerful high-intensity laser to speed up electrons to just below the speed of light. They would then fire these electrons into a slab of gold to create a beam of photons a billion times more energetic than visible light.

The next stage of the experiment involves a tiny gold can called a hohlraum (German for ‘empty room’). Scientists would fire a high-energy laser at the inner surface of this gold can, to create a thermal radiation field, generating light similar to the light emitted by stars.

Lead researcher Oliver Pike who is currently completing his PhD in plasma physics, said: “Although the theory is conceptually simple, it has been very difficult to verify experimentally. We were able to develop the idea for the collider very quickly, but the experimental design we propose can be carried out with relative ease and with existing technology. Within a few hours of looking for applications of hohlraums outside their traditional role in fusion energy research, we were astonished to find they provided the perfect conditions for creating a photon collider. The race to carry out and complete the experiment is on!”

The research was funded by the Engineering and Physical Sciences Research Council (EPSRC), the John Adams Institute for Accelerator Science, and theAtomic Weapons Establishment (AWE), and was carried out in collaboration with Max-Planck-Institut für Kernphysik.

UK discovery 'starts race' to turn light into matter (BBC News) With gold and photons, scientists offer way to turn energy into matter (LA Times) Scientists to attempt to make matter out of pure light (The Daily Mail) Matter will be created from light within a year, claim scientists (The Guardian)