Let's change the world with music Alumnus and global broadcaster Tony Hollingsworth on his career creating change through music since his role in the 1980's Glastonbury festivals. 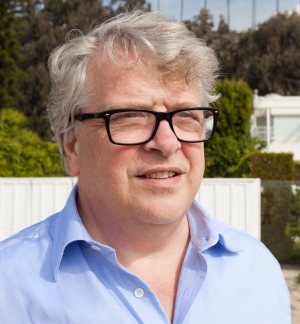 This weekend will see over a hundred thousand revellers descend on a small farm in Somerset for one of the world’s great music festivals. An alumnus with a rather special link to the festival is Tony Hollingsworth (MSc Management Science 1980), who helped his cousin Michael Eavis to manage the first seven annual Glastonbury events in the 1980's.

Building on his experiences with Glastonbury, in the years since, Tony has produced some of the world’s biggest broadcast events, including the 1988 concert for Nelson Mandela’s 70th birthday. This raised worldwide awareness of Mandela's imprisonment and called for his release. Tony has also fundraised over £21 million for causes that include Amnesty International and the Red Cross.

How would you describe your career since graduating?

At Imperial I studied production, encompassing steel and cars, and the print industry. I was always very interested in the politics and the culture of production. What I went on to produce is slightly different – mostly global broadcast events – but the politics remains a strong theme through campaigning events, campaigning programmes, or campaigns themselves.

What has been your biggest career highlight?

Definitely the first Nelson Mandela concert in 1988, broadcast to 67 countries and an audience of 600 million. It was an event used as a campaign tool to demand his release from prison. I’m very proud that I could have contributed in that small way to what was enormous pressure from many quarters for the end of apartheid.

If I can pull it off, an annual global media campaign for the world’s most disadvantaged children. It has an event but it will be far more campaign-driven. There will be 12 months of social media and web activity, three months of traditional PR campaigning, ending in a feature documentary and a global broadcast.

What do you recall of your time at Imperial?

I enjoyed my time at Imperial, and it was very useful for me intellectually. It was a time of being exposed to lots of different ways of looking at productive processes. It opened a lot of theoretical doors, of which I went through but a few!

Can you tell us about your professors?

During one lecture he said to us: ‘Plan to only work eight hours because things will go wrong. Spend the first hour thinking on your own, then over the next seven hours have one person from each of the departments reporting to you come and speak to you for an hour.’

So in his experience of industry, the answer was seven - manage seven people and spend seven hours a day speaking to them. Even though it’s not theoretical I actually believe he’s right, and every now and again I wish I’d used it more!

My advice to students is to encourage them to try and understand the political and social context of their work as much as they can.

Is there anything you would say to current students?

My advice to students is to encourage them to try and understand the political and social context of their work as much as they can. No matter how pure a scientist or engineer or medical practitioner they become, it’s going to shape their work and their career enormously.

Do you have any quotes that you really like?

Well, there’s a little sentence… I’m not going to say it’s a motto or anything like that, but it is significant. In 1988 Mandela went onto that stage and said to a world audience of over 580 million people ‘thank you that you chose to care.’

That he said ‘thank you’ to a world audience was very, very important, but he also used the word ‘care’. I think that caring is the central part of humanity and the part that should be applauded and encouraged.

Find out more about Tony's current campaign Listen, which campaigns for the rights of disadvantaged children