Dr Aldo Faisal and his team's work on developing an eye controlled wheelchair has been featured by Reuters.

Their work involves developing an algorithm-based decoder system that enables wheelchair users to move around simply by looking to where they want to travel. The system is inexpensive, easy to use and could transform the lives of people who are unable to use their limbs.

What is clever about the system is not only can it read eye movements to control the direction of the wheelchair it can also tell if a person is merely looking at something or actually wants to move.

Visual information is detected by cameras trained on both eyes which is then analysed by algorithms within 10 milliseconds, and translated into instructions for movement that's almost instantaneous.

Researchers on the project have discovered that when looking ahead the subject also moves their eyes upwards by as much as three times a second so the system has to use a calibration process to filter the data and identify where the subject is looking and whether they want to move or not.

Multiple Sclerosis or spinal cord injury patients with severe paralysis can often use this technology because their eye movement is directly controlled by the brain. Current tracking software often uses a screen-based system where the user has to look at locations on the screen which diverts the users' attention from the outside world and therefore increases the risk of not noticing obstacles.

Tests on able-bodied volunteers found steered through crowded buildings faster and with fewer mistakes than when using other eye tracking technologies. Trials on disabled patients are about to start and the team hopes its system could be commercially available within three years.

See the Reuters video and full story at: 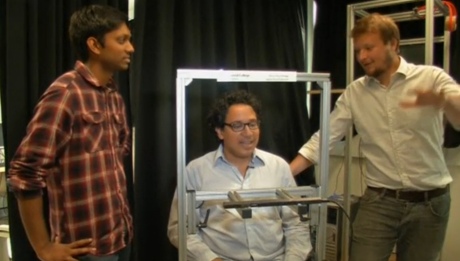