Long-term exposure to a neonicotinoid pesticide harms bees' ability to forage for pollen and may be changing their choices of which flowers to visit.

In a new study published in the British Ecological Society's journal Functional Ecology, scientists used Radio Frequency Identification (RFID) tags, which are similar to those used by courier firms to track parcels, to monitor the day-to-day behaviour of bumblebees. They found that prolonged pesticide exposure significantly impaired the bees’ foraging activity.

Lead researcher Dr Richard Gill from Imperial College London, said: “Bees pollinate many of our crops including most of our fruits, vegetables, nuts and coffee. In fact, one in every three mouthfuls of food we eat depends on bee pollination, so it is particularly worrying to see such a chronic impairment of their foraging behaviour.”

Bees pollinate many of our crops including most of our fruits, vegetables, nuts and coffee. In fact, one in every three mouthfuls of food we eat depends on bee pollination, so it is particularly worrying to see such a chronic impairment of their foraging behaviour

Co-lead researcher Professor Nigel Raine from the University of Guelph, said: “Bees have to learn many things about their environment, including how to collect pollen. Exposure to this neonicotinoid pesticide may be preventing bees from being able to learn essential skills.”

The scientists, who carried out the research whilst at the Royal Holloway University of London, monitored 259 bumblebees from 40 colonies over a four-week period and measured the impact of two pesticides, neonicotinoid (imidacloprid) and pyrethroid (lambda cyhalothrin).

Bumblebee colonies that had been exposed to the neonicotinoid pesticide brought back significantly reduced amounts of pollen in comparison to untreated colonies, suggesting that persistent exposure weakens the foraging performance of bumblebees.

To compensate for the lack of pollen being brought back by each individual bee, the scientists suggest that neonicotinoid-treated colonies also sent out more foragers.

When scientists looked at the colour of collected pollen they also found evidence to suggest that exposed foragers preferred different flowers to forage on.

Results also revealed that pesticides are preventing bees from improving their pollen foraging ability as they age. Foragers in untreated colonies carried larger pollen loads as they got older and more experienced.

The scientists are urging for environmental policy-makers to consider reforms of the risk assessment guidelines for pesticide use. Dr Gill said: “Pesticide risk assessments should consider how prolonged exposure to low levels of pesticide might affect foraging performance. Our data suggest that these tests should be conducted for extended periods to detect the effects of chronic exposure. Reforms to pesticides risk assessments should also include bumblebees, and solitary bees. Current tests only include honeybees, even though their ecology and behaviour differ substantially from other bees.” 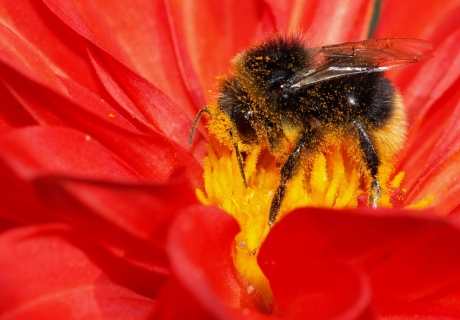 Previous research has tended to focus on the impacts of short-term pesticide exposure over a period of 48 hours. But as current farming techniques rely heavily on pesticides to produce and maintain high crop yields, it is likely that bees in the field are exposed to pesticides over a much longer period.

This is the first study to accurately examine long-term exposure and by fitting each bumblebee with a tiny RFID tag, the researchers were able to build up a detailed picture of when individuals went out and returned to their colony throughout the four-week experiment.

The bees were housed in wooden boxes within a temperature controlled naturally lit laboratory, but were also connected to the natural environment via an outlet hole. The bees were therefore free to forage outside the laboratory at will, and all colonies were provided with artificial nectar (sugar water) in feeders they could choose to visit, hence bees collected all of their pollen and some nectar from real flowers in the field.

To expose the colonies to pesticides the neonicotinoid was provided in the sugar water and the pyrethroid sprayed onto filter paper which the bees could walk over to reach the feeder.

The study was funded by the Biotechnology and Biological Sciences Research Council (BBSRC), the Department for Environment Food & Rural Affairs (Defra), the Natural Environment Research Council (NERC), the Scottish Government and the Wellcome Trust under the Insect Pollinators Initiative, which is managed under the auspices of the Living with Environmental Change (LWEC) partnership.