Professor Paul Matthews is the first holder of the Edmond and Lily Safra Chair.

A £3 million gift donated by Lily Safra and the Edmond J. Safra Foundation will accelerate Imperial's research into neurodegenerative diseases.

Professor Paul Matthews, Head of the Division of Brain Sciences at Imperial, has been named as the first Edmond and Lily Safra Chair. This appointment will substantially strengthen a major research programme integrating neurotechnology, “big data”, imaging science and experimental neurology for the development of new diagnostics and treatments for Alzheimer’s disease and other neurodegenerative diseases. A specific focus for converging technologies will be to build on Professor Matthews’ previous research on the role of inflammation in neurodegenerative disease, which offers hope for the rapid development of new therapies.

The £3 million donation will fund a new senior postdoctoral fellowship programme for outstanding young scientists conducting novel research in the area. Edmond and Lily Safra Neuroscience Scholars will receive a salary, research costs and laboratory space for three years, enabling them to conduct new research and to establish themselves in a research career.

Mrs Lily Safra said: "Diseases of the brain like Parkinson’s and Alzheimer’s are only becoming more prevalent, and I know first-hand the suffering they cause to patients and families. I am proud to be funding pioneering brain research at dozens of institutes around the world, as well as programmes to improve the care of patients and to support their caregivers. I am delighted that the distinguished Professor Paul Matthews will be the first Edmond and Lily Safra Chair, and I am confident that he and the young people who will be selected as Edmond and Lily Safra Scholars will make groundbreaking contributions to our understanding of the human brain. They represent hope for all of us, and I wish them much success." 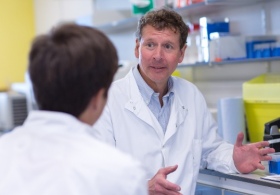 Professor Paul Matthews, Head of the Division of Brain Science and Edmond and Lily Safra Chair in Translational Neuroscience and Therapeutics, said: "This gift is a major investment in the future of neuroscience research at Imperial. It offers the flexibility we need to pursue high-risk, high-return science that will open up new directions in the fight against neurodegenerative conditions. Our intention is build on the special strengths of technology, data science and medicine in the College. The ‘bench to bedside’ ethos of the programme is intended to lead to improved methods for diagnosis, monitoring and treatment in the near medium term,  but the impact of the gift will be felt for many years to come.  We are immensely grateful to Mrs Lily Safra and the Edmond J. Safra Foundation for the generosity of their support."

Heather Williamson, Director of Principal Gifts at Imperial said: "This gift from Lily Safra and the Edmond J. Safra Foundation will support future generations of scientists in the fight against neurodegenerative diseases like Alzheimer’s and Parkinson’s Disease. Their commitment is inspirational, and testifies to their belief in the power of science to respond to the health challenges of the 21st century."

The Edmond J. Safra Foundation was established by the accomplished banker and devoted philanthropist Edmond J. Safra, and since his passing in 1999 it has continued to support good causes under the leadership of his wife, Lily Safra. The Foundation is today a major funder of projects in education, science and medicine, religion, culture and humanitarian relief in over 40 countries. It has previously established the Edmond J. Safra Chair in Neuropsychopharmacology, also within Imperial's Division of Brain Science, which is currently held by Professor David Nutt.