Over 470 bioengineers gathered at Imperial for MECbioeng14, which brings together researchers from 40 universities, alongside representatives from industry, charities and government, to help foster regional and national networks and drive forward development of the UK as a global hub for medical innovation.

The inaugural event, held on 10-11 September, combines for the first time the Medical Engineering Centres’ Annual Meeting and the Bioengineering Society's annual conference.

Sponsored by the Wellcome Trust and EPSRC, MECbioeng14 featured Plenary Talks by Professor Dominic Durrand - Director of the Neural Engineering Center at Case Western Reserve University in Cleveland, and Professor Paul Davies - Director of the Beyond Center for Fundamental Concepts in Science at Arizona State University.

Opening the event, Professor Gast said: “It’s very exciting to have the first joint meeting of the Medical Engineering Centres and the Bioengineering Society here at the College. It feels very appropriate to be hosting such a meeting at Imperial, which has always been ahead of its time in Bioengineering. In the 1960s, Imperial formed the Physiological Flow Studies Unit, the Engineering in Medicine Lab, and the Biomechanics Group. All of these groups were leading the way in their respective fields. This vision and innovation continues in Bioengineering at Imperial, and in many other Centres and Departments across the College. 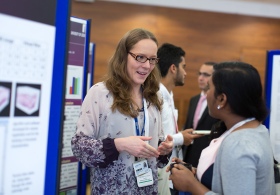 “By its nature, bioengineering is one of the most collaborative academic fields, and Imperial highly values collaboration across disciplinary, institutional and regional boundaries. For this reason I am gratified to see this conference bringing together multidisciplinary Medical Engineering Centres from Imperial, Oxford, King’s and Leeds – as well as the Wellcome Trust, EPSRC and the Bioengineering Society.

“At Imperial, bioengineers ensure that their basic research gets translated for societal benefit. Imperial recently received a transformational £40 million gift from Imperial alumnus Michael Uren, which we will invest in a brand new Biomedical Engineering Research Hub at Imperial West. I hope many of you will be involved.”

George Freeman MP, Minister for Life Sciences, addressed delegates as the conference came to a close on Thursday 11 September. He said:  “It is a real pleasure to be here today at Imperial - an absolute powerhouse in the UK’s innovation economy.

The core underlying work that you are doing as bioengineers is utterly essential to the landscape of 21st century healthcare and medicine. You are laying the foundations for the companies, jobs, and the innovative treatments and products of tomorrow.” 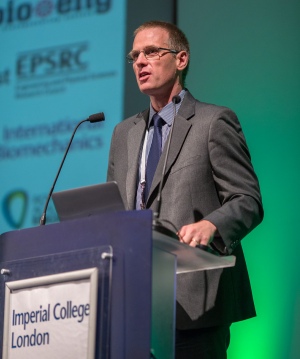 Professor Anthony Bull, Chair of MECbioeng14 and Head of Department of Bioengineering, said: “The merger of these two events reflects what is good about bioengineering in the UK. As well as being well funded as a discipline, we have a vibrant collective spirit - and bringing you all together for this conference shows that in a powerful way.”

Dr Jenna Stevens-Smith, Director of MECbioeng14 said: “We are delighted with the number of delegates attending the conference. As a bioengineer myself, I have seen the discipline grow over the last ten years and am keen to see the UK bioengineering community work more closely together to drive the discipline forward in the UK.”