Getting to know President Alice Gast We sit down with President Alice Gast, Imperial's 16th Head, to find out about the journey that led her to Imperial and what drives her.

When I meet Alice, on the morning of Friday 19 September, the news has just come through that Scotland will remain part of the United Kingdom. While we don’t discuss the result or politics in any detail, she admits to being drawn in by the intense campaign and build-up. Interestingly, Alice says she often likes to observe other leadership styles. 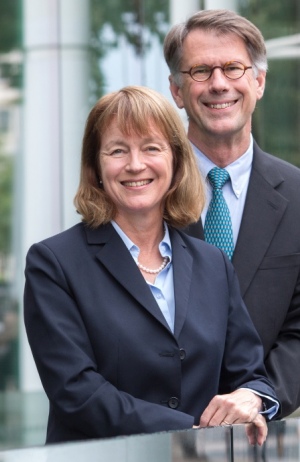 “For example, it might be that I admire the way they present something or work through a problem; but then of course there are those instances where you think, ‘I definitely wouldn’t want to do it in that way’.”

Reaching across borders and disciplines is certainly something that is in vogue at the moment whether in politics, science, art or music. But for Alice it’s been a lifelong career habit, and even seems to have been hardwired from an early age.

“My father was a biochemist and I used to tag along to the lab occasionally to see what he was doing. We’d often look at images from early electron microscopes. But I also remember helping him repair the car and taking apart my bicycle, painting it and putting it all back together – so I had that mechanical focus too.”

At high school Alice most enjoyed chemistry, physics and maths and so it made sense to “pull those together” when opting to take a degree in chemical engineering at the University of Southern California.

The joy of discovery

She completed her postgraduate work at Princeton University, receiving a Masters and PhD in chemical engineering setting up a successful research career focussed on the exciting and often surprising interactions that take place at the surface of small particles. It’s an area that laid the foundations for what is now called nanotechnology. While Alice has been fully occupied with academic leadership for many years now, she looks back at her lab days with obvious fondness and pride. 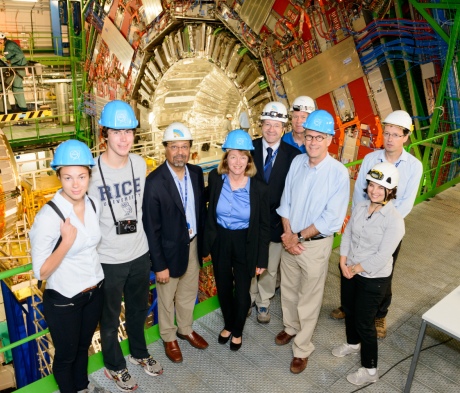 Alice with her family on a recent visit to CERN (see Q A panel, right)

“There have certainly been moments in my research career where the sheer excitement of things working and coming out well is just euphoric. I remember doing neutron scattering experiments at NIST in Maryland studying these polymer micelles, which are essentially particles with hairy surfaces that interact in interesting ways. We turned the beam on and started getting the image and as it built up we saw the result we expected and it was beautiful really.”

For Alice though, there was always a pull to explore new avenues and horizons and that meant looking further afield. At graduate school in Princeton she learned to speak French, studying early in the morning, and went on to successfully apply for a postdoctoral NATO fellowship at ESPCI in Paris – returning to the city as a Guggenheim Memorial Foundation Fellow in 1991 while on sabbatical at Stanford University. She also spent time in Munich on sabbatical where she moved into the field of biophysics, studying protein crystallization on membranes.

It was during her 16 years at Stanford University that Alice started to take on more leadership roles in overseeing projects. The university had, and still has, a Synchrotron Radiation Lightsource, producing high energy X-rays for scientific research. Alice became a faculty member for the facility and led a faculty design consultation for a new building that would bring medical and science researchers together in mixed labs – a space now called the Clark Centre.

“That was really stepping out of my scientific and teaching role and looking at how physical space influences the way people collaborate and how people from very different fields can work together. I think it took some real bravery and boldness on the part of many of the researchers – who were comfortable in their own reputation – to move beyond their area of expertise.”

From Stanford it was onto the Massachusetts Institute of Technology where Alice served as Vice-President for Research and Associate Provost for five years and then the office of President at Lehigh University for eight years from where she came to Imperial. Alice had very successful tenures leading and growing both these institutions, and just as when she was a junior professor, she looked for opportunities that would take her down new avenues.

In 2006, Alice co-chaired a National Academies committee advising the government on the topic of science and security before being appointed as a Science Envoy for the Department of State in 2010.

Speaking about that period Alice says: “It was post 9/11 and it was an important time in striking the balance between openness and sharing and the need to keep certain information secure from those who would do us harm. I got very involved in international student visas and making sure we had a flow of talent from overseas and that export issues with regards to sharing information and collaborating among research groups were thought through.”

Alice has spent much of her working life at universities around the world, and clearly has a love for campus life.

“It’s just a wonderful environment; there are always arts, music and sporting events going on. Also there’s a real community spirit I think too – at Stanford my kids were in the childcare centre which really benefited me and other academics and I know we have something similar at Imperial with the Early Years Education Centre.” 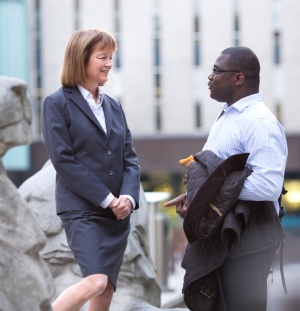 While the expansive campuses of Stanford and Lehigh might be a far cry from our own tightly-knit London homes, Alice sees that as an opportunity to get out and about meeting academic and support staff and students.

“Being compact actually has its benefits I think, you do bump into people more, and have those serendipitous encounters and conversations from which great new ideas spring.”

Alice plans to spend the next few months visiting different Departments with the Provost and Faculty Deans, getting to know academic and support staff better. With her extensive experience driving interdisciplinary collaboration Alice is keen to host a series of receptions and breakfasts with divergent groups – encouraging a broader mix of staff to get together. Impressed at the huge range of student clubs and societies, she also suggested this might be a new way of connecting with our student community – through something they have a real passion for.

So what should the wider Imperial community expect in the months and years to come from their President? The overriding impression is of someone bold and brimming with new ideas, who values the breadth of opinions that are part and parcel of university of life.

“I think my leadership style has evolved over time as I’ve matured; I certainly hope so since I’ve learned so much along the way from so many different people. I do feel it’s important to get all the voices around the table and have a discussion that moves everyone forward, so that they each see the benefits of a certain decision even if it is not exactly how they wanted it to go.” Who have been your main mentors?

Certainly the late Chuck Vest and Bob Brown, who were President and Provost, respectively at MIT. I learned a tremendous amount about academic leadership from both of them. Also I would say that Shirley Tilghman, President of Princeton University, has been a mentor.

Are you currently reading a book or novel?

Strides by Benjamin Cheever. It’s about the history of running from antiquity onwards, with some of the author’s own personal running experiences thrown in there. As a runner myself, it’s quite fascinating.

Is there a gadget you couldn’t do without?

I have my ipad and iphone with me most of the time and I find that certain apps can become quite addictive. I use ‘Log my run’ and now I feel like I don’t get any credit for a run if I don’t log it properly! I already use Yoyo to pay for refreshments on campus. It’s a great system.

I understand you’re a keen hiker, any favourite destinations?

That’s tough, there are so many. Some that spring to mind include the Sawtooth Range in Idaho, the Swiss Alps and the Penang National Forrest in Malaysia – we saw lots of wildlife there and some monkeys stole our apples.

The last time you were in awe?

When I visited CERN in June  and the detectors were open to view. I’ve worked in some impressive beamline facilities in my career but CERN is something else. It will be exciting as it goes to full power later this year.