Fifteen entrepreneurs from promising early-stage digital and technology start-up companies had the opportunity to pitch their idea and business plan to groups of investors over the course of the dinner, which was organised by the London Node of the European Institute of Innovation & Technology’s (EIT) ICT Labs.

Imperial was a founding partner of the London Node, which was established at the College's Imperial West campus earlier this year. It provides access to European funding and facilitates links between researchers and businesses to bridge the gap between research and the commercial delivery of innovative products and services. 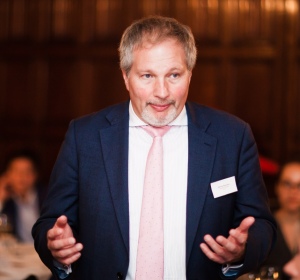 Dennis Moynihan, Director of the London Node, said: “It was great to see the start-up and investor communities have this opportunity to come together.  EIT ICT Labs is all about driving innovation.  By helping investors find the best ideas, and entrepreneurs access finance at the scale that’s right for them, we can serve as a true catalyst. With our UK launch just this year, Tuesday’s Investor’s Dinner is an early example of what we hope to achieve here in London, building on the strengths of our pan-European innovation community.”

EIT ICT Labs is all about driving innovation. By helping investors find the best ideas, and entrepreneurs access finance at the scale that’s right for them, we can serve as a true catalyst.

Director of the London Node

Richard Foulsham, Programme Coordinator for EIT ICT Labs at Imperial, organised the event along with Florian Uhlig from the Technical University of Berlin and Jerome Chifflet from Inria - a  French public research body dedicated to digital science and technology.

Richard said: "Much of Silicon Valley’s success lies in the bringing together of researchers, business and investors together in one place.  It’s a community that together is greater than the sum of its parts."

"Historically in Europe we’ve not had this kind of co-location, but the London Node is trying to address this at Imperial West, building a community that creates new opportunities for collaboration and commercial ventures and drives forward innovation”

Prior to the dinner guests also had access to preparatory training sessions, which offered investors advice on matters such as risk management, due diligence and portfolio management whilst providing a grounding in pitching for the start-up entrepreneurs. 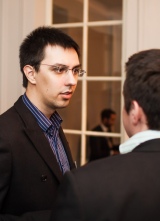 Josef Dobos attended the event to pitch his start-up 3D Repo, an open-source online version control system for 3D files such as those used in architecture or product design.  He said “It is rare to have the chance to meet and pitch to such large group of potential investors at one event, especially from so many different locations accross Europe. As an early-stage start-up company, this has been a fantastic networking opportunity.”

Investors at the dinner included both venture capitalists as well as business angels – individuals who invest their own personal funds in businesses while contributing their expertise, skills, and contacts.

Business Angel Marcel Dridje said: “Angels might receive files for more than 40 start-up companies every week, and we have to sift through all of them to find the gem. That’s why this kind of event, where innovative start-ups have been carefully selected,  can be so useful.”

Imperial alumnus Simon King, who represented Octopus Investments at the event, said: “As well as being fantastic to meet so many promising start-ups, it has been incredibly valuable to meet with other investors from across Europe. Co-investing is common, and a face-to-face relationship is key to building the trust required to enter such a partnership.”

It aims to drive European leadership in ICT innovation to facilitate economic growth and contribute to tackling some of Europe’s biggest societal challenges.

EIT ICT Labs operates through seven centres – or Nodes - located throughout Europe. The London Node is led by Imperial, UCL, Intel and BT, with further support from Vodafone, IBM, the University of Edinburgh and Institute of Sustainability.