The winners of the 2014 Nobel Prize for Physics have been announced this week.

The prize has gone to Professors Isamu Akasaki and Hiroshi Amano from Nagoya University, Japan and Shuji Nakamura from the University of California at Santa Barbara, for the invention of efficient blue light emitting diodes.

In 2007 Professor Nakamura gave the GP Thomson Lecture at Imperial College London as part of the College’s centenary celebrations. Here Professor Donal Bradley, Vice-Provost for Research, former Head of the Department of Physics, and Director of the Centre for Plastic Electronics at Imperial College London looks back on that lecture and explains the significance of the Nobel prize-winning work. 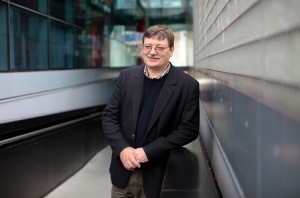 “During Professor Nakamura’s lecture we were treated to a tour de force presentation that vividly recounted the trials and tribulations required to control the growth and doping of gallium nitride (GaN) and related semiconductors to the level that light emitting diodes could be made to work. This took years of unrecognized effort – initially Shuji Nakamura’s work at the Nichia Chemical Company was classified as ‘under the table’ or ‘Friday afternoon’ research since it was considered so unpromising that it was not backed as an official research project. It’s great to see his work recognised today and I would like to offer my congratulations to him and his co-laureates Professors Akasaki and Amano for their perseverance in the face of many set-backs.

“It wasn’t until 1992 that the first practical LED was made and the laser followed in 1996. These devices are now commonplace in our world, initially providing the lighting industry with unheard of efficiency, robustness and longevity and now spreading out to be used in other areas including, for example, in reading and writing Blu-Ray data and in water sterilization.  Before GaN the inorganic semiconductor of choice for blue light emission LEDs was silicon carbide; but once GaN and its ternary compounds with Indium and Aluminium arrived this material was essentially relegated to being of interest only as a substrate material.

“For those of us working in the organic LED (or OLED) field, it is fortunate that GaN LEDs were unknown at the time of the invention of the small molecule (by Professor Ching Tang and Dr Steven van Slyke at Kodak in Rochester) and conjugated polymer (by Jeremy Burroughes, myself and Richard Friend) OLEDs, otherwise this technology might not have seen the light of day. Thankfully, we have seen OLEDs go on to be commercialized for use in mobile phone, tablet and television displays and they are starting to enter the lighting arena. OLEDs can be fabricated as large area emitters whilst GaN LEDs are point source emitters and I have enjoyed debating with Shuji Nakamura their competing merits for lighting. I am delighted to see him receive this well-deserved honour.”

Nobel Prize in Physics for Higgs and Englert: Kibble congratulates the winners