Researchers use real data rather than theory to measure the cosmos For the first time researchers have measured large distances in the Universe using data, rather than calculations related to general relativity.

A research team from Imperial College London and the University of Barcelona has used data from astronomical surveys to measure a standard distance that is central to our understanding of the expansion of the universe.

Previously the size of this ‘standard ruler’ has only been predicted from theoretical models that rely on general relativity to explain gravity at large scales. The new study is the first to measure it using observed data. A standard ruler is an object which consistently has the same physical size so that a comparison of its actual size to its size in the sky will provide a measurement of its distance to earth.

“Our research suggests that current methods for measuring distance in the Universe are more complicated than they need to be,” said Professor Alan Heavens from the Department of Physics, Imperial College London who led the study. “Traditionally in cosmology, general relativity plays a central role in most models and interpretations. We have demonstrated that current data are powerful enough to measure the geometry and expansion history of the Universe without relying on calculations relating to general relativity.

We hope this more data-driven approach, combined with an ever increasing wealth of observational data, could provide more precise measurements

“We hope this more data-driven approach, combined with an ever increasing wealth of observational data, could provide more precise measurements that will be useful for future projects that are planning to answer major questions around the acceleration of the Universe and dark energy.”

The standard ruler measured in the research is the baryon acoustic oscillation scale. This is a pattern of a specific length which is imprinted in the clustering of matter created by small variations in density in the very early Universe (about 400,000 years after the Big Bang). The length of this pattern, which is the same today as it was then, is the baryon acoustic oscillation scale.

The team calculated the length to be 143 Megaparsecs (nearly 480 million light years) which is similar to accepted predictions for this distance from models based on general relativity.

Published in Physical Review Letters, the findings of the research suggest it is possible to measure cosmological distances independently from models that rely on general relativity. 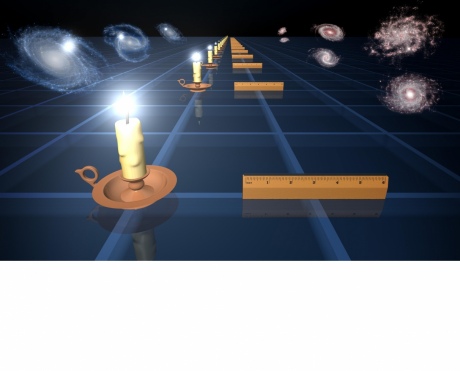 Einstein’s theory of general relativity replaced Newton’s law to become the accepted explanation of how gravity behaves at large scales. Many important astrophysics models are based on general relativity, including those dealing with the expansion of the Universe and black holes. However some unresolved issues surround general relativity. These include its lack of reconciliation with the laws of quantum physics and the need for it to be extrapolated many orders of magnitude in scales in order to apply it in cosmological settings.  No other physics law have been extrapolated that much without needing any adjustment so its assumptions are still open to question.

Co-author of the study, Professor Raul Jimenez from the University of Barcelona said: “The uncertainties around general relativity have motivated us to develop methods to derive more direct measurements of the cosmos, rather than relying so heavily on inferences from models. For our study we only made some minimal theoretical assumptions such as the symmetry of the Universe and a smooth expansion history.”

There is a big difference between measuring distance and inferring its value indirectly. Usually in cosmology we can only do the latter and this is one of these rare and precious cases where we can directly measure distance

Co-author Professor Licia Verde from the University of Barcelona added: “There is a big difference between measuring distance and inferring its value indirectly. Usually in cosmology we can only do the latter and this is one of these rare and precious cases where we can directly measure distance.  Most statements in cosmology assume general relativity works and does so on extremely large scales, which means we are often extrapolating figures out of our comfort zone.  So it is reassuring to discover that we can make strong and important statements without depending on general relativity and which match previous statements. It gives one confidence that the observations we have of the Universe, as strange and puzzling as they might be, are realistic and sound!”

The research used current data from astronomical surveys on the brightness of exploding stars (supernovae) and on the regular pattern in the clustering of matter (baryonic acoustic oscillations) to measure the size of this ‘standard ruler’. The matter that created this standard ruler formed about 400,000 years after the Big Bang. This period was a time when the physics of the Universe was still relatively simple so the researchers did not need to consider more ‘exotic’ concepts such as dark energy in their measurements.

“In this study we have used measurements that are very clean,” Professor Heavens explained, “And the theory that we do apply comes from a time relatively soon after the Big Bang when the physics was also clean. This means we have what we believe to be a precise method of measurement based on observations of the cosmos. Astrophysics is an incredibly active but changeable field and the support for the different models is liable to change. Even when models are abandoned, measurements of the cosmos will survive. If we can rely on direct measurements based on real observations rather than theoretical models then this is good news for cosmology and astrophysics.”

The research was supported by the Royal Society and the European Research Council. Gravity may have saved the universe after the Big Bang, say researchers Podcast: listening for gravitational waves and swapping the lab for government