The Atlantic Ocean at mid-depths may have given out early warning signals, 1,000 years in advance, that the last Ice Age was going to end.

Scientists had previously known that at the end of the last Ice Age, around 14,700 years ago, major changes occurred to the Atlantic Ocean in a period known as the Bolling-Allerod interval. During this period, as glaciers melted and the Earth warmed, the currents of the Atlantic Ocean at its deepest levels changed direction.

The researchers have analysed the chemistry of 24 ancient coral fossils from the North Atlantic Ocean to learn more about the circulation of its waters during the last Ice Age. They found that the corals recorded a high variability in the currents of the Atlantic Ocean at mid-depths, around 2km below the surface, up to 1,000 years prior to the Bolling-Allerod interval. The team suggests that these changes may have been an early warning signal that the world was poised to switch from its glacial state to the warmer world we know today, and that the changes happened first at mid-depths.

The study, published today in the journal Paleoceanography, was carried out by researchers from Imperial College London in conjunction with academics from the Scottish Marine Institute, the University of Bristol and Caltech Division of Geology and Planetary Sciences.

Dr David Wilson, from the Department of Earth Science and Engineering at Imperial College London, said: “The world’s oceans have always been an important barometer when it comes to changes in our planet. Excitingly, the coral fossils we’ve studied are showing us that the North Atlantic Ocean at mid-depths was undergoing changes up to 1,000 years earlier than we had expected. The tantalising prospect is that this high variability may have been a signal that the last Ice Age was about to end.” 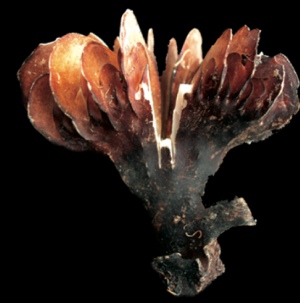 The fossil corals analysed by the team come from a species called Desmophyllum dianthus, which are often around 5cm in diameter and look like budding flowers. They typically only live for 100 years, giving the team a rare insight into what was happening to the ocean’s currents during this relatively brief time. Thousands of years ago they grew on the New England Seamounts, which are a chain of undersea mountains approximately 1000km off the east coast of the US, located at mid-depths 2km beneath the surface. This underwater area is important for understanding the North Atlantic’s currents.

While some of the corals analysed by the team come from historical collections, most have been collected by researchers from previous expeditions in 2003 and 2005 to the New England Seamounts. The researchers used deep sea robotic submergence vehicles called Hercules and Alvin to collect the ancient coral fossils.

These ancient coral fossils accumulated rare earth elements from seawater, including neodymium, which leached from rocks on land into the Atlantic Ocean and circulated in its currents, eventually ending up in the coral skeletons. Neodymium isotopes in different regions of the world have specific signatures, created by radioactive decay over billions of years. The scientists studied the chemistry of the coral fossils to determine where the neodymium isotopes had come from, giving them a glimpse into the circulation of the Atlantic Ocean at the end of the Ice Age.

Since the world’s oceans are connected by currents, the next step will see the team integrating the evidence they gathered from the North Atlantic Ocean into a picture of global changes in the mid-depths of oceans around the world. In particular, the team is interested in exploring how the Southern Ocean around Antarctica changed around the same time by analysing neodymium isotopes in a collection of Southern Ocean corals.