Thursday's Showcase, hosted by Imperial Create Lab, was the final night of the Venture Catalyst Challenge (VCC) - an enterprise pre-accelerator run by Imperial Innovations. The pre-accelerator was a six week programme of workshops and development, designed to let teams test the commercial viability of their ideas culminating in pitching for funding to a panel of judges to help them to develop their ideas to market.

FungiAlert is the work of Kerry O'Donnelly and Angela de Manzanos, two PhD students at Imperial's Institute of Chemical Biology Centre for Doctoral Training. The two set out to develop a low-cost, easy to use device for the early detection of plant pathogens in fields, which could help farmers to detect the presence of fungal spores before they infect crops.

Kerry O'Donnelly said: "We are extremely happy to have won. The past six weeks in the VCC have been a very steep learning curve and we look forward to applying what we've learnt in the next stages of FungiAlert's development."

The past six weeks in the VCC have been a very steep learning curve and we look forward to applying what we've learnt in the next stages of FungiAlert.

Angela de Manzanos added: "Our product is unique in that it gives an immediate reading  from the spores of the plant and does not require specialist labour, which can save farmers a significant amount of money in terms of testing. Furthermore, by knowing the safety of the soil they are using, farmers can be more selective in their use of fungicides, which presents another opportunity to lower costs."

The panel of judges featured a range of experts from business, science and enterprise including Imperial's Provost Professor James Stirling. He said: "The standard this evening was very high and it is great to see such entrepreneurial spirit among our students. The businesses presented tonight have a strong scientific foundation, which inevitably leads to many possibilities. We have seen some fantastic ideas and I hope that all of the teams tonight go on to succeed." 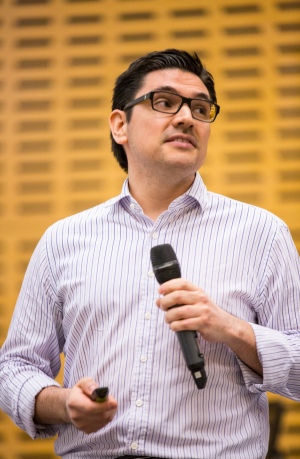 The VCC programme is supported with a mix of masterclasses from guest speakers, one-to-one mentoring sessions with industry experts, and group feedback sessions to prepare teams in aspects such as customer development, early-stage finance and presentation skills.

Now in its third year, the competition attracted more than 150 applications from around Imperial, with 14 groups participating and 9 selected to pitch at the Showcase.

Other products at the showcase included ‘Sweet Generator’, a method for converting waste water from factories into low cost electricity and ‘Chop Chop’, an app that uses artificial intelligence to combine several recipes into a single taskflow.

The standard this evening was very high and it is great to see such entrepreneurial spirit among our students.

The showcase was also the conclusion of the inaugural Breakthrough Innovation Award, organised by Imperial Create Lab in collaboration with Imperial College London and Google X. The Award saw Imperial staff nominate student projects that present ‘moonshot’ solutions—science-fiction-like breakthroughs with the potential to improve hundreds of millions of lives.

Three finalists were chosen to present while the VCC judges deliberated. The highest accolade went to Fernando Avila-Rencoret, who took home £3,000 for his project ‘EndoDrone’ and the two runners up received £1,000 and support from Google X’s Moonshot Platform – Solve for X.

EndoDrone is a project designed to increase the effectiveness of current techniques to discover early-stage colon cancer. By deploying robotic drones inside the colon, EndoDrone can identify signs of cancer that are otherwise near-invisible to the human eye. The device will now be reviewed to be featured on Solve for X.

Russ Cummings, CEO of Imperial Innovations, said: "We were presented with a vibrant collection of ideas and businesses, all with science at the heart. All the participants have shown incredible passion for the science at the core of their businesses, as well as ambition to disrupt and create new markets. It's very encouraging to be surrounded by such entrepreneurial drive and I wish all the teams the greatest success in developing their ventures."