Aviation could take to the seas to ease pressure on airports, suggests study Futuristic trans-Atlantic seaplanes could be the answer to growing pressure on commercial airlines, according to research by Imperial engineers. 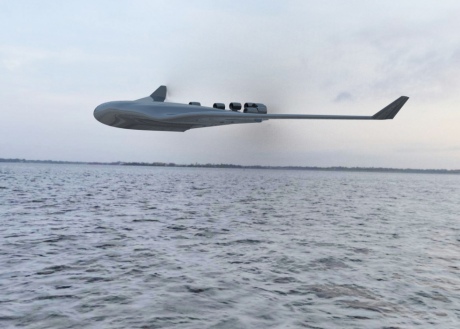 The world is experiencing growth in global air traffic and in order to cater for the growing market, the aviation industry is seeking to expand major airports, allowing for the development of bigger, faster, and more efficient aircraft.  However, concerns over environmental degradation and noise pollution pose a barrier to the expansion of many already heavily constrained major airports.

Researchers from Imperial’s Department of Aeronautics have developed a design concept for a medium to long-range seaplane, which they say may reduce the pressure on inland airports.

The design takes its inspiration from the flying boat aeroplanes of the 1940s, which had a V shape hull, giving the plane buoyancy and navigability when landing and taking off from the water. The seaplane has a ‘blended wing body’ configuration, where its hull slopes upwards to blend seamlessly into the underside of the aircrafts’ wide wings, lending it a more steamlined appearance. This design has the advantage of reducing air resistance, or drag, when it is in the air, which could make it more fuel efficient.

The team say their largest concept seaplane design would have the capacity to carry up to 2000 passengers at a time. This is compared to the world’s largest passenger airliner currently in operation, the Airbus A380, which can hold only to 800 passengers in a trip.

In a study published by the Royal Aeronautical Society, the researchers assessed the possibility of using highly advanced waterborne aircraft as an alternative to conventional planes for trans-Atlantic travel. The team showed that such a radical design could be feasible, although further design refinements would be needed.

Dr Errikos Levis, from the Department of Aeronautics at Imperial, said: “For many people the majestic seaplanes of the 1940s evoke a more romantic era in aviation history. However, when it came to efficiency and the sheer volume of people that they needed to carry, these planes couldn’t compete with the newer passenger aircraft coming on to the market in the 1950s and they quickly lost their appeal. In the Twenty First Century, the aviation industry is facing new challenges and we wanted to show a radical approach to the constraints on land-cased airports, and look at how advanced seaplanes, using today’s technology, could once again become an alternative mode of travel for long-haul flights.”

However, the study has shown the team that while the seaplane concept has its advantages, there are a number of challenges that would need to be ironed out before these planes could be used by the aviation industry.

One of the issues the team faced when designing their seaplane concept was the lack of data available for them to factor in the constraints of using the ocean as a runway. When designing a conventional plane, engineers take into account various characteristics of the aircraft, ensuring it will be able to take off and land safely within the confines of a regular runway. The Imperial team had little or no data about factors such as the impact of shipping lanes and coastal geology.

To overcome this challenge the researchers used similar formulas to those used in designing conventional aircraft, and with a very conservative estimate of the aircraft’s potential weight, the engineers were able to calculate the size of the wings needed to produce the correct amount of lift, and the necessary power needed to take off within a set distance.

Dr Levis experimented with different seaplane configurations, studying their hull shapes and wing sizes, and concluded that the largest plane design was the most efficient in terms of fuel consumption and stability in rough seas.   However, the fuel efficiency achieved still falls short compared with conventional aircraft of comparable size.  With further modifications to the design of the hull shape and a reduction in the structural weight of the plane, Dr Levis suggests that a modified design may be able to compete with the fuel efficiencies of conventional aircraft.

The colossal size of the seaplane design could have another advantage say the team, enabling it to use environmentally friendly hydrogen fuel, which has no harmful emissions. Hydrogen fuel takes up four times the amount of space of traditional kerosene fuel and is currently impractical for conventional aircraft to store.

However, given the huge financial constraints on developing a fleet of aquatic aircraft and the associated infrastructure needed to operate them, the team say that it would be difficult to envisage these aircraft taking to the skies in the near future. Nevertheless, the next step for Dr Levis and his team will be to refine existing formulas and prepare the designs for much more detailed modelling.

The study was carried out in conjunction with Professor Varnavas Serghides, Honorary Senior Research Fellow from the Department of Aeronautics.