Lean LaunchPad for Synthetic Biology has been running for the past twelve weeks at the College, aiming to equip inventors in the field with the skills, knowledge and understanding to commercialise their idea.

Marking the completion of the programme this week, the Lean LaunchPad teams came together to present their business models and share the lessons they learnt, the skills they developed, and the customers they discovered. 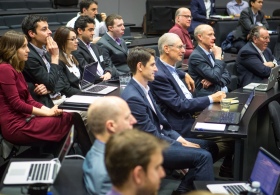 This is the first time that the Lean LaunchPad - the brainchild of US entrepreneur Steve Blank  -  has been brought to the UK for synthetic biology.

Named one of the 30 most influential people in tech by Forbes magazine in 2013, Mr Blank pioneered the Customer Development methodology - which encourages entrepreneurs to put customers at the heart of their product development.

Lean LaunchPad put a focus on participants talking to their target customers - finding out what they want and need, and reiterating and developing their business plan and product according to the insights they gained.

The course was organised through SynbiCITE, an Innovation and Knowledge Centre (IKC) based at Imperial which aims to provide a bridge between academia and industry to speed up the development of new technologies in synthetic biology.  It has been open to students, researchers, and members of SynbiCITE’s 19 academic and 56 industrial partners. 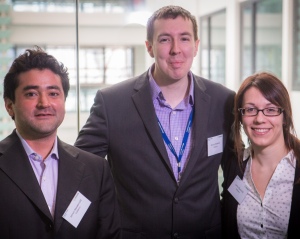 Team Cellibero, made up of Imperial postdoctoral researchers Dr Richard Kelwick, Dr James MacDonald, and Dr Lorna Ravenhill, presented their range of science education kits based around molecular biology. The innovative kits use a cell-free based system - which is a freeze-dried mix of non-living cellular machinery, derived from harmless bacteria, and DNA, which can be activated by adding water to produce colourful proteins or enzymes that generate scents.

Richard said: “When we began thinking about business ideas, we knew that we wanted to come up with something that we were passionate about and that would really make an impact. As children we remembered playing with chemistry sets and electronics sets, and we wanted to see if there would be a market for a molecular biology equivalent – a way of getting young people excited about the kind of science we do in the lab.”

“We’ve had a lot to learn over the past 12 weeks, and the Lean LaunchPad process has been a real eye opener to who our customers are, what they want, and how our product can meet their expectations. We’re all now looking to take the leap from academia into the business world and hope to soon be in a position to launch our company.” 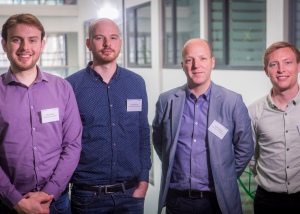 Nanocage Technologies, which included Dr Geoff Baldwin from the Department of Life Sciences, and PhD students Marko Storch, Ben Mackrow and Matthew Haines, presented their idea to harness protein nanocages as a cell targeting delivery system for drug therapies. Protein nanocages are tiny structures containing a hollow core capable of carrying compounds. The team outlined how they could be used to transport drugs to the specific cells where they are needed. For example, cancer therapies – which are often toxic – could be delivered directly to cancerous cells rather than to the whole body, reducing their unpleasant side effects.

Geoff said: “Lean LaunchPad has been an incredibly interesting process. It has taken us into completely new territory and forced us out of our academic comfort zone. Thinking in terms of commercialisation rather than research really helped us to focus on our business needs.  It drove home that no matter how excited we might be about an idea, it isn’t going to work if nobody is going to pay for it.”

The pair worked with Steve Blank and his colleague Jerry Engel to create a unique version of the course specifically for synthetic biology. 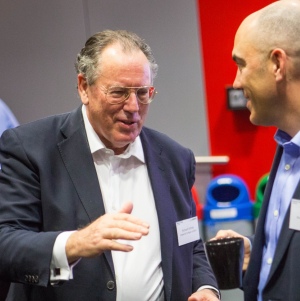 Professor Kitney said: “In November 2013 I was visiting San Francisco on a trade mission relating to synthetic biology. Because I had grown two successful companies, one of our American colleagues invited me to attend an evening session of Lean LaunchPad, led by Steve Blank and Jerry Engel.

“I immediately realised that this was something very special - the participants learned important things about growing companies which had taken me years to understand.  At a meeting after the session we agreed to work with Steve and Jerry to create a special version of Lean LaunchPad for synthetic biology at Imperial for the UK community in the field.” 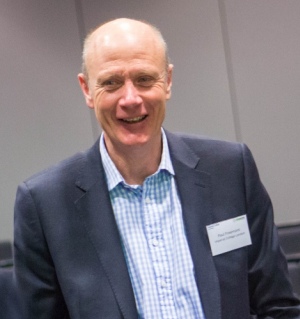 Professor Freemont said: "As a co-founder of two companies, I have learned the hard way that new technologies must have customers. The Lean LaunchPad course teaches teams the methodology of customer discovery and the ethos of 'get out of the building' and through this the teams learn in several weeks what most start-ups learn in several years. “

“It has been wonderful to watch the teams grow and develop over the last 11 weeks with some of their business ideas and product having changed significantly during that time. I have no doubt that several of the teams will go on and build new successful companies and I am very proud of their achievements."

Stephen Chambers, Chief Executive of SynbiCITE said: “I wish I’d had access to the Lean LaunchPad programme when I was starting my previous companies.  Risk will always be part of any start-up, it one of the reasons why business is so exciting. The Lean LaunchPad helps manage that risk, quickly identifying which ideas have commercial viability and saving entrepreneurs both time and money - very precious commodities in any start-up.”

“The progress all the teams have made on the programme is very impressive – to develop fully formed scalable business models within 12 weeks is an incredible achievement. With a number of the teams now launching companies based on their business models, I couldn’t be more pleased with the outcome of the programme”.

Members of the public can learn more about synthetic biology at the Imperial Festival, which showcases the best in science and arts.

Professor Richard Kitney, from the Department of Bioengineering, will be delivering a lecture explaining how techniques to re-engineer DNA could revolutionise vast areas of global industry - from vaccines to face creams and new sources of energy to new foods.

Synthetic biologists will also be on hand in the Festival's Research Zone to demonstrate how synthetic biology could be used to prevent desertification, purify water and recycle waste products.