Making skyscrapers safer, by understanding phenomena such as 'travelling fires', is discussed by an Imperial researcher in an interview.

Dr Guillermo Rein, from Imperial’s Department of Mechanical Engineering, is a world-leading expert on the combustion of solid fuels in fires. The aim of his work is to reduce the impact of accidental fires and to protect people, their property, and the environment.

Dr Rein talks to Colin Smith about a modelling method that he has developed over the years, which takes into account the effects of fires in large open-planned spaces, synonymous with today’s modern architecture. Here he describes phenomena such as ‘travelling fires’ and ‘flame flapping’ and their effects on burning buildings.

Why do we study building fires?

Engineers carry out sophisticated calculations during the design phase to ensure that buildings are able to withstand the effects of fires. In countries such as the UK codes and regulations are rigorously enforced to ensure our buildings are safe. 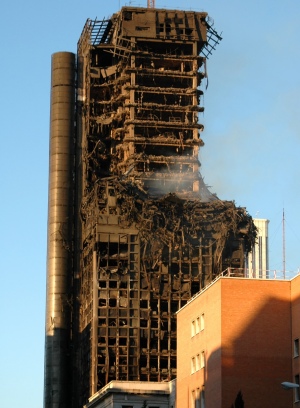 However, our current understanding of fires and their effects on buildings are based on models that predict that they burn uniformly across a room, and this is true for small spaces such as cell-like offices. Consequently, this assumption that fires burn uniformly is reflected in building designs and safety codes.

Recent studies of real fire outbreaks have shown, however, that fires don’t burn uniformly in large spaces such as modern offices, which are typically built as open-plan environments. In these situations a fire can travel from place-to-place in the room wherever there is combustible material available. We call this phenomenon a ‘travelling fire’.

Although such travelling fire behaviour may seem obvious to some people, especially to the fire service, it was only agreed as potentially important by structural fire engineers after the 9/11 attacks on the World Trade Centre Towers in 2001. Travelling fires were also observed in a fire that led to the partial collapse of the Windsor Tower in Madrid (2005), which was one of the worst fires in the city’s history. Luckily no one was killed in that disaster, unlike the 9/11, although many firefighters were injured and the economic losses were enormous.

Consequently, design codes and our understanding of the behaviour of structures subjected to fire are only now beginning to properly reflect this phenomenon. Our models enable engineers to predict the effects of travelling fires in open-plan spaces, which could make our buildings withstand fires for longer, which is so important for evacuation.

What happens when a travelling fire takes hold?

During the 9/11 terrorist attack in New York, debris from the collapsing Twin Towers started a travelling fire inside 7 World Trade Centre, which was one of the many buildings on the World Trade Centre site. The combustible material in the building fed the fire, enabling it to travel across floors and from floor-to-floor. This generated hot spots of searing temperatures moving around that weakened the steel in the structure and eventually led to its collapse.

You’ve developed and refined a model that helps engineers to mitigate the effects of travelling fires.

The effect of fire on the structural stability of buildings is critical in regards to the evacuation of a building’s occupants and safe access for firefighters. This is particularly the case in tall buildings where extended evacuation times are required.

In 2009, while at Edinburgh University my students and I developed a model called the Travelling Fires Methodology, which is helping engineers model the effects of travelling fires in open plan environments.

You’ve recently done further refinements to the model and introduced the phenomenon of ‘flame flapping’. What is it and how does it affect building fires?

If you’ve ever stared at a fire you’ll notice that large flames flicker. This flickering effect is what we refer to as flame flapping. It is the lateral movement of the flame as it swishes from side-to-side. We’ve now introduced this phenomenon in our models. We know that the flames are the most intense source of heat in a travelling fire, and it contributes more than smoke to weakening of critical infrastructure such as steel or concrete beams. However, we’ve not been sure of the effect of flame flapping on structural weakening for different scales of fire size. 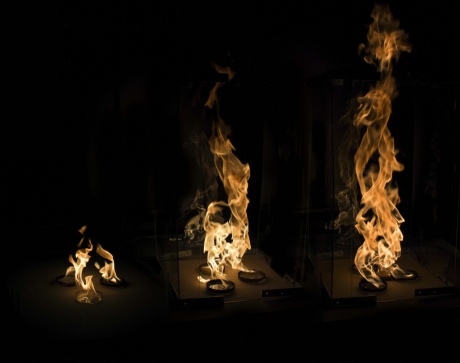 In our most recent research we applied the flame flapping model to different burning scenarios to determine their effect, focussing on small, medium and large travelling fires. In a small fire we found that travelling fires with flame flapping is not a big problem because heating is less intense, meaning the fire is less likely to weaken critical infrastructure. In large fires, we found that the fire is intensive, but rapid, burning out quickly before the structure is weakened too badly. However, for medium sized fires we found that travelling fires with flame flapping has the most detrimental effect. This is because the fire burns intense and long, enabling the heating to continue over longer periods. In turn, this generates challenging fire scenarios, pushing the building to a critical level, where important structural elements such as beams or columns can fail.

How can we reduce the detrimental effects of medium sized travelling fires?

The best protection of a structure from fire is twofold: engineers need to identify the critical parts of the structure that are likely to carry the largest loads, and then they need to design them to be strong and resilient. Travelling fires methodology helps structural engineers do this.

Where to now with your research?

Modern timber products for structural engineering create the possibility of designing high-rise buildings that are more sustainable. In fact, architects are now considering timber in buildings of 30 storeys and more. However, as a flammable material, the single biggest barrier to the construction of these buildings is the perceived fire risk. We now are interested in applying our models to timber buildings and help to improve their structural strength and safety.