Scientists have shown that they can drive cardiac stem cells to become heart muscle cells using a silicon chip etched with grooves.

The team from Imperial College London have developed a silicon chip with tiny grooves, which are 0.01 millimetres wide and only 0.0003 millimetres deep. They showed that the grooves stimulated a biochemical response in the cardiac stem cells that helps switch them into cardiomyocytes, which are the muscle cells that make up most of the heart. 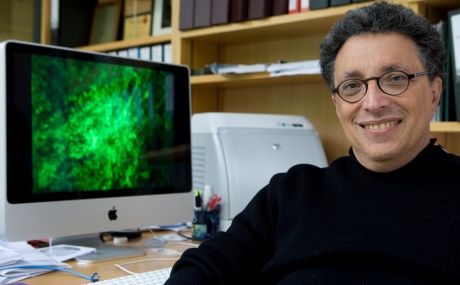 Heart disease is a major source of disability and has caused 17 million deaths worldwide in 2012. Scientists around the world are carrying out studies to convert stem cells into cardiomyocytes that are suitable for implantation in patients to regenerate heart muscle. However, the process for developing cardiomyocytes is currently inefficient and its outcome imperfect.

The researchers from Imperial are the first to show how materials can play an important role in boosting the effect of an 'instructive' gene cocktail, providing an environment that helps switch cardiac stem cells into cardiomyocytes. They reported a two-fold increase in cardiomyocytes, compared to cardiomyocytes developed by the genes on a silicon chip with a flat surface instead.

The study is published this month in the journal Biomaterials. It was carried out at Imperial by by PhD student Constant Morez, Department of Materials,  and supervised by Professors Molly Stevens, Department of Materials and Bioengineering, and Michael Schneider, the National Heart and Lung Institute and the British Heart Foundation Centre of Research Excellence.

Professor Michael Schneider, co-author from the National Heart & Lung Institute at Imperial, said: “Over the last 30 years, progress in treating heart disease has improved patient outcomes yet, despite this success, the remaining damage to heart muscle predisposes patients to heart failure.

“Scientists are focussing on developing a range of therapies to regenerate heart muscle. The challenge has been to create the right micro-environment for fostering the switching process, which is currently inefficient and imperfect in its outcome. Our approach demonstrates how silicon chips may provide the right conditions for creating heart muscle cells.”

A team of researchers from the University of California were the first to show how a micro-grooved silicon chip enhanced adult cells’ reprogramming into an embryonic stem cell-like state. The research undertaken by the Imperial team builds on this discovery to show that grooved silicon chips can improve the conversion of stem cells by a gene cocktail into potentially useful heart muscle cells.

In the study the researchers found that when the cardiac stem cells are squeezed in between closely spaced grooves it forces them to become long and thin. This change in shape is communicated to proteins associated with the stem cells’ DNA in a way that makes it more susceptible to being reprogrammed by the protein myocardin. This is the key molecular switch that causes myocardin gene expression in the cardiac stem cells to turn them into cardiomyocytes.

The team are still unsure as to the precise reasons how grooves in the silicon chip play such an important role in the switching process. They aim to carry out further research to help them to understand how the cells sense their physical environment and convert this information into a specific biochemical change. They will also investigate ways of further enhancing the process to make it more efficient.