Painting a picture without lifting a finger, thanks to robotic technology

New technology developed by Imperial researchers shows how, in the future, having an extra robotic arm might help people to multitask.

The engineers have developed computer software that enables the user to control a robotic arm with eye commands to paint a simple picture. The technology demonstrates how one day people may be able to extend their range of abilities and use robots to do more than one task at time. The technology could enable users to be more productive in the work place or home. 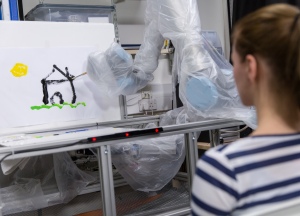 In the video (left), Dr Aldo Faisal, from the Departments of Computing and Bioengineering, demonstrates how augmenting a robotic arm could extend the range of humans. In the Brain and Behaviour Lab Sabine Dziemian, a postgraduate student from Imperial, controls the robotic arm with eye commands to paint a simple picture. The technology was also developed in conjunction with William Abbot, who is a postgraduate student from the Department.

Dr Faisal’s research group is part of the Imperial College London Robotics Forum, which is one of the largest robotics networks in Europe, consisting of 21 research groups. A major showcase of the latest advances in robotics research is being held at the College today. Speakers are talking about the advances they are making in robotics, from improving robot vision, and powering microscopic robots, to helping robots to learn through observing how their owners perform their daily duties.