The broader problem of diesel emissions News on diesel exhaust has brought concerns about NOx emissions from new Euro 6 cars and their ability to meet EC regulations on NO2 to the forefront.

Current publicity regarding emissions from VW diesel cars has brought concerns about NOx emissions from new Euro 6 diesel cars and effects on compliance with EC regulation on concentrations of nitrogen dioxide (NO2) to the forefront. These concerns are enhanced by the clearer evidence that has emerged recently on the direct adverse effects of NO2 on health. However, the problem is broader than the gap between real world emissions and vehicle emission standards for NOx, the proportion of NOx(nitric oxide (NO) + NO2) emitted directly as NO2 is also important, and is unregulated.

The European Commission has set successively tighter Euro standards for vehicle emissions. The latest, Euro 6, introduced in 2015, limits emissions of NOx from diesel cars to 80 mg/km over a prescribed laboratory test cycle. In contrast EC air quality regulations apply to concentrations of NO2 (with an annual mean limit value of 40 µg/m3) introducing complexities of chemistry. Compliance includes roadside locations. 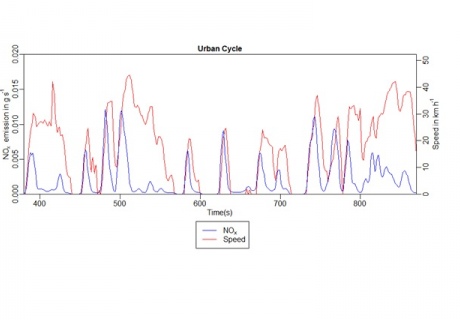 At Imperial College we have analysed measurements made by Emissions Analytics with a Portable Emissions Measurement System (PEMS) fitted to vehicle exhausts on both urban roads and motorways. This data clearly indicates how NOx emissions occur in sharp peaks, coinciding with factors like acceleration, indicated by peaks in speed in Figure 1, which is more prevalent in urban driving where population exposure is higher.

The study also found a wide range of conformity between real world emissions of NOx from the 13 Euro 6 vehicles measured and the Euro 6 standard (see figure 2a). In addition very high percentages (i.e. from 30% to as much as 90%) of NOx emissions were emitted directly as NO2 (see figure 2b). For comparison the percentage of NOx emitted as NO2 by petrol cars is around 5%. Such variability in emissions is affected by driving behaviour, and the configuration and functioning of technologies to control NOx and fine particulates. 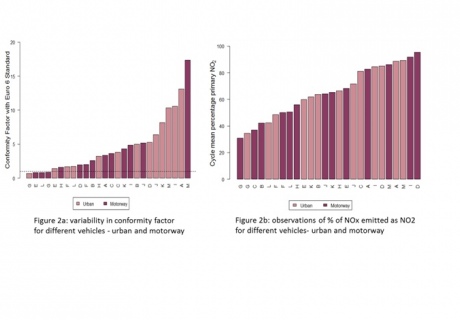 The gap between real world emissions and those implied by the EC Euro 6 standard is already well recognised, and reflected in the COPERT methodology widely used for estimating “real” road transport emissions and for air quality modelling in the UK and Europe. At Imperial we have used COPERT estimates of current Euro 6 vehicle emissions to model a variety of future traffic flows and road-side concentrations of NO2 in 2020, by which time a large proportion of vehicles will be of this vintage.

We have then explored the effect of future improved “Euro 6c” emissions, in line with current EC proposals for lower diesel emissions from new cars by 2017, designed to close the gap with test cycle standards. This clearly reduces NO2 concentrations (see right hand side of figure 3). We have also experimented reducing the proportion of NOx emitted directly as NO2 from 30% as assumed in COPERT, to 5% as is more typical of petrol vehicles. This has a pronounced effect on NO2 concentrations (left hand side of figure 3). Noting the health problems entailed, clearly the diesel problem is not only the amount of NOx emitted but also depends on its chemical form. 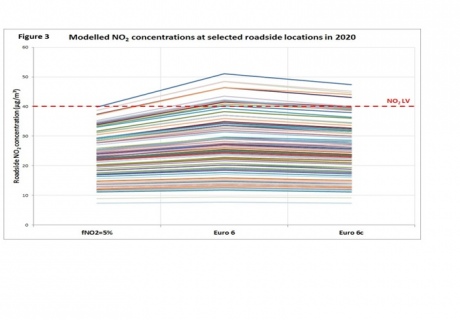