President Alice Gast speaking at the Royal College of Physicians

The event, held at the Royal College of Physicians, celebrated the charity’s £1.7 billion contribution to UK science, education and the arts since it was founded by Sir Isaac Wolfson in 1955.

By their willingness to make large bets on big ideas, charities have an outsized impact on the future progress of science.

Professor Gast paid tribute to the Wolfson Foundation as a major catalyst for UK science:  “In 1959 my own institution, Imperial College, received generous support for new laboratories in biochemistry and chemical microbiology. The UK soon became a world-leader in these then-nascent fields. Almost immediately the Nobel laureate Ernst Chain chose to return to Imperial from Italy to take advantage of cutting-edge facilities. Generations of great scientists followed, and support from the Wolfson Foundation continued. Those scientists’ discoveries have had a transformative effect on the life sciences, from botany to medicine to genetics. Countless lives have been improved.

“That’s just one of thousands of examples of Wolfson Foundation grants making this country a better place. As the Wolfson Foundation turns 60, we should celebrate a charity that has had an unparalleled impact on the UK’s excellence in science, education and the arts.” 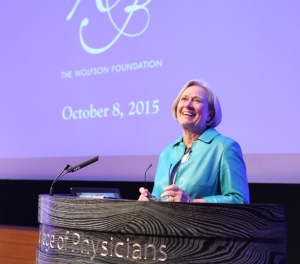 Professor Gast introduced the keynote speaker, molecular biologist Shirley Tilghman, who was the first woman to lead Princeton University (between 2001 and 2013).

Professor Tilghman used her speech to highlight the importance of independent charities in supporting blue skies and fundamental research. She said: “By their willingness to make large bets on big ideas, charities have an outsized impact on the future progress of science. What is truly gratifying to me as a scientist is the support that the Wolfson Foundation provides for scientific infrastructure, a critical part of the ecosystem that is so often ignored.”