Professor Colin Prentice, AXA Chair in Biosphere and Climate Impacts from Imperial’s Department of Life Sciences, and one of the study’s authors, said that the results mean river flows will continue to decrease in regions that are already water-stressed.

The researchers examined river flow and climate records in Australia going back more than 30 years, and compared them with satellite images of changing vegetation cover during the same period. This is the first large-scale study of its kind to show the effect of carbon dioxide (CO2) levels both on plant cover and on water flows.

It’s good for the plants that higher CO2 concentrations mean greenness is increasing, but they use more water, meaning there’s less for rivers and less for us.

The study, published today in Nature Climate Change, was led by Dr Anna Ukkola, who carried out the research work at Macquarie University, Sydney under Professor Prentice’s supervision.

“I think people will be surprised that we have demonstrated so clearly that there is an effect on such a large scale it can be seen from space and measured in streams and rivers,” said Professor Prentice.

“It’s amazing that the results translate from experiments on individual plants to this kind of scale. But it’s reassuring, too, because this is what our theoretical models predict and we can show that the numbers stack up.”

Plants have small openings in their leaves called stomata, which take in CO2 and let out water vapour. As the levels of CO2 in the atmosphere rise, the stomata partially close. This is because the plants need to take in a less air to get the same amount of CO2, with the benefit that they are then able to use water more efficiently. 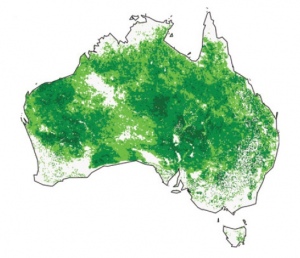 Areas of vegetation investigated in the study

With rising CO2 in the atmosphere due to the burning of fossil fuels, some researchers have suggested that when plants use water more efficiently there would be more water reaching rivers. However, this new study has shown the opposite.

Although individual plants use less water, more plants are able to grow. This can be seen in satellite images showing greenness spreading across semi-arid areas. Instead of consuming less water, the greener vegetation actually uses more water overall, leading to less runoff of water into rivers.

This effect is only observed in semi-arid and sub-humid regions of Australia. In wetter areas, the influence of water on plants is not so large since there is always plenty of water available. This means that regions where there are lower levels of rainfall to start with will experience a more dramatic impact on river flows.

“It’s good for the plants that higher CO2 concentrations mean greenness is increasing, but they use more water, meaning there’s less for rivers and less for us,” said Professor Prentice.

This surprising finding was made possible because of the exceptionally high quality of water data available in Australia, allowing the researchers to pick apart the various possible influences on river flows and factor out the large year-to-year variations in precipitation that are typical of this dry continent.