Professor Alice Gast says it is no surprise that universities and science are high on the agenda for Chinese President Xi Jinping's state visit.

Through academic collaborations with China, the UK is becoming richer and more influential.

President Gast said: “China watchers have spent recent months observing the Shanghai Composite Index’s fluctuations, and puzzling over their meaning for the future of China and the rest of us. They are looking in the wrong place. A far more telling measure can be found in research citation indices and world university rankings, where the rise of Chinese research and education is extraordinarily clear.

“Their collaborative work is being cited in hundreds of thousands of high-quality academic papers. In 2005, just 3 per cent of Nature and Science papers published by academics at my university, Imperial College London, also included an author from a Chinese institution. Today, 22 per cent of our papers in those journals include Chinese co-authors.

“But it’s the stories behind those numbers that really show us why China matters so much. Flick through any major scientific journal and you’ll see why. 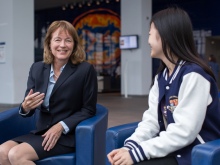 “On my desk, I have a copy of Science that features a significant breakthrough in the fight against antibiotic resistance. This collaboration between researchers at Imperial College and colleagues at China’s Peking University (with US partners at Pennsylvania State University and University of Wisconsin-Madison)... could have implications for healthcare for decades to come. It may help us understand why many drugs are becoming dangerously ineffective, and may give us a chance to reverse that process.”

In her conclusion, Professor Gast quotes the Chancellor of the Exchequer George Osborne, who is visiting Imperial alongside President Xi. “George Osborne wants the UK to become ‘China’s best partner in the West’,” she writes. “Our universities already are. Through academic collaborations with China, the UK is becoming richer and more influential.”

The full piece can be read at Times Higher Education.