As he visited, Imperial announced a series of new UK-China education and research collaborations.

The President and First Lady Madame Peng Liyuan were joined by the Duke of York Prince Andrew, the Chancellor of the Exchequer George Osborne, Commercial Secretary to the Treasury Lord O’Neill, and several senior Chinese ministers.

Imperial College London strives to be China’s best academic partner in the West.

They were welcomed to Imperial, the UK’s number one research partner with China, by Professor Alice Gast, Imperial’s President, and the Provost, Professor James Stirling.

Professor Gast explained how Imperial experts and their Chinese partners are working together on cutting-edge research in fields including nanotechnology, bioengineering, computing, advanced materials, environmental engineering and public health.

In a speech, she told President Xi and guests: “Imperial’s exceptional academics and talented students are working with outstanding Chinese partners. Together we are addressing some of the world’s greatest challenges.” 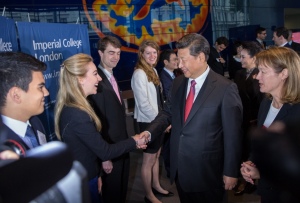 “Brilliant students and academic collaborations are making both the UK and China stronger, more prosperous and ready to deal with the challenges of this century."

Imperial has intensified its research collaborations with China significantly over the last decade. In 2005, 3% of Science and Nature papers authored by Imperial academics had a co-author from a Chinese institution. In 2015, that figure stands at 22%.

As China’s top research partner in the UK, Imperial’s academics and students benefit from collaboration on a daily basis.

Imperial’s Chinese research partners include businesses like Huawei and China Southern Railway, as well as scientific institutions such as Tsinghua University, Zhejiang University, Shanghai Jiao Tong, Wuhan and Peking Universities, and the Chinese Academy of Sciences.

At the College, President Xi visited some of the world’s most advanced labs specialising in big data research and medical robotics. He also met a group of Imperial students, two of whom were from the College’s 2,000 strong Chinese student community.

As President Xi visited, the Chinese Scholarship Council announced plans for scores of China’s most academically able scholars and students to receive funding to come to Imperial, as well as support for Imperial’s finest PhD students to undertake research work at Chinese universities. 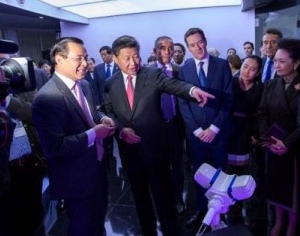 Professor Guang-Zhong Yang with President Xi in the Hamlyn Centre

The China UCF Group announced that it will donate £3 million to support research at Imperial’s Data Science Institute and Hamlyn Centre for Medical Robotics, both of which were visited by President Xi.

Imperial also revealed plans for a partnership with Zhejiang University, a longstanding research collaborator, for a new centre for transnational entrepreneurship to be based in London.

Professor Alice Gast, Imperial's President, said: “UK-China relationships are increasingly important and increasingly beneficial to both countries. British universities have been instrumental in building and strengthening these relationships. Academics are enthusiastic diplomats, productive collaborators and ideally placed to benefit from our exchanges and partnerships with Chinese universities. 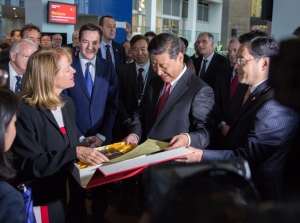 “As China’s top research partner in the UK, Imperial’s academics and students benefit from collaboration on a daily basis. Chinese institutions are a great source of innovative ideas and they are outstanding partners.

“From nanotechnology to aeronautics, great things happen when Imperial scholars work with their Chinese peers.

“Imperial’s Chinese students have developed a reputation for innovation, creativity and an openness to new ideas. They are the leaders of tomorrow. Their work today will help shape the UK-China relationship for generations to come.”

During the visit, the Data Science Institute’s Director Professor Yike Guo showed President Xi how Imperial data scientists, in collaboration with Chinese and international partners, are helping policymakers around the world to develop internal migration policies that are conducive to entrepreneurship. Professor Guo also presented a data-driven analysis of China’s “One Belt, One Road” policy’s economic and social impact internationally. 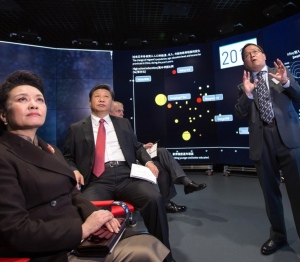 He went on to show how Imperial medics are partnering with computer scientists to enable the application of personalised medicine on a vast scale. Professor Guo also demonstrated how smart cities researchers are monitoring and analysing transport usage for London’s tube and Shanghai’s metro networks.

At the Hamlyn Centre, its Director, Professor Guang-Zhong Yang, showed how Imperial’s innovations in medical robotics have facilitated the development of smaller, cheaper robots that enable healthcare professionals to conduct operations with unprecedented precision at low cost. 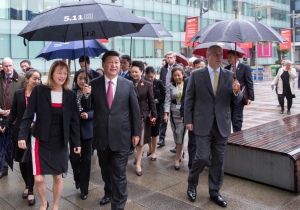 President Xi, the Duke of York and the Chancellor interacted with the latest medical robots, including a snake robot for ultra-flexible use in surgery. Professor Yang also demonstrated how smart instruments with integrated imaging and sensing are being developed at Imperial for use in robotic micro-surgery.