Dr Petit (third from right) with her research group

Dr Camille Petit has been recognised for her outstanding work designing nanomaterials to tackle global energy challenges and climate change. 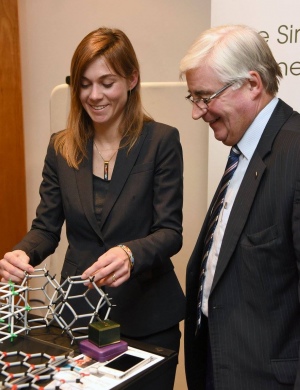 In her presentation titled “Little solutions to big problems”, Dr Camille Petit described her research in detail and outlined her vision for the use of nanomaterials to mitigate problems of climate change and put us on a path to energy sustainability. She has also received the French Carbon Group award for her “significant contribution to carbon science and/or carbon technology as a young scientist/engineer” in 2011. The award ceremony at IChemE’s London headquarters was also attended by a number of researchers from the Department.

The Sir Frederick Warner Prize is presented biennially to scientists in the early stages of their career who “show promise in the field of sustainable chemical process technology, nuclear technology or in making chemical engineering more accessible to a wider scientific community”. It was named after Sir Frederick Warner, a former IChemE President and founding member of the Royal Academy of Engineering, and the longest serving member of the IChemE until his death in 2010.

Please join us in congratulating Dr Petit on her award and wish her more success to come in her promising research career.

To see more images from the award presentation ceremony, visit the IChemE Facebook page and read the IChemE article for the award. You can also find more information about Dr Petit's work on her research page.

All images courtesy of IChemE.