Over 400 guests including staff and students gathered at NTU’s Yunnan Garden campus to celebrate the Lee Kong Chian School of Medicine with the launch of a book that tells the story of its making.

Guest of Honour Mr Lim Chuan Poh [FIC 2010], chairman of the Governing Board of LKC Medicine, addressed guests including Dr Lee Seng Tee, Deputy Chairman of the Lee Foundation, which gave the School its founding gift when it was officially signed into existence in October 2010. 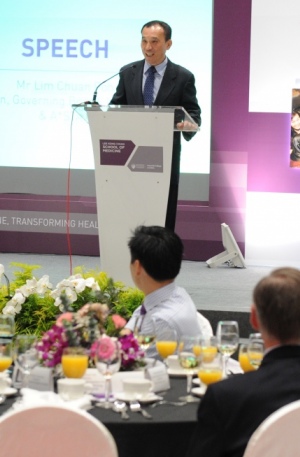 Against the backdrop of Singapore’s Golden Jubilee in 2015, Mr Lim said it was a privilege to see how far and how fast LKCMedicine had come and looked forward to the stories it would be able to tell at Singapore’s 100th birthday.

“It’s exciting when you have the opportunity to start something new, something never done before,” he told the audience in LKCMedicine’s newly operational Experimental Medicine Building.

He noted that in the last three years over 60 universities around the world had visited LKCMedicine to learn how it was formed, before looking forwards to 2016 when the school would admit its first group of PhD students, its fourth cohort of undergraduates and when the school will open its new 20 storey Clinical Sciences Building at the Novena campus

Acknowledging the role of many individuals who had played a role in making the medical school, he also welcomed those with new senior LKCMedicine responsibilities at Imperial, Vice Dean (Education) for the Faculty of Medicine, Professor Des Johnston, and Head of Imperial College School of Medicine, Mr Martin Lupton.

Opening the celebrations Dean of LKC Medicine, Professor James Best told guests that histories, birthdays and anniversaries matter, and congratulated those who had fought strongly for LKC Medicine from the start.

President of NTU Professor Bertil Andersson [FIC 2004] recalled the day in 2007 he was asked by text message to join Singapore’s Committee on the Expansion of the University Sector. When he received papers for its first meeting, he noted the first two large items of business were for a new university and a new liberal arts college and the final, small item was for a new medical school in order to satisfy the country’s growing demand for new doctors.

He recounted conferring with fellow committee member and NTU Chairman Koh Boon Hwee and together they decided to seize the moment and attempt to bring the new school to NTU.

He singled out former minister Dr Ng Eng Hen for his political championing of the complex project, which met with pockets of resistance and tough negotiations.

“Five years on we have a unique medical school that is a rare union of two top global universities, and one that we can be proud of,” he said.

President Alice Gast addressed the celebrations with a pre-recorded message in which she congratulated staff across NTU and Imperial for what had been achieved in five years, and acknowledged the importance of the foundations that had been laid based on people with great working relationships.

Making of a Medical School: Lee Kong Chian School of Medicine details the early developments of Singapore’s newest medical school and is based on interviews with individuals closely involved in the formative years. 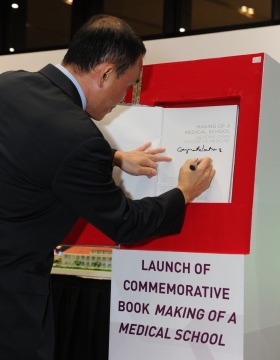 Over 182 pages, the book traces the developments which prepared the ground for the July 2010 signing of the memorandum agreement between Imperial and NTU, through to the pioneer intake in August 2013 and the Foundation Stone laying and visit to the School in January 2015 by the President of Singapore Dr Tony Tan Keng Yam.

The School’s second historical book follows 11 Mandalay Road published in 2014, which detailed the renovation and restoration of historic buildings that became the School’s Headquarters building at Novena.

The School was named after local philanthropist Tan Sri Dato Lee Kong Chian following its foundational gift in 2011, which remains the largest single philanthropic gift to any institution in Singapore. With government matching the total gift amounted to $400M.

During his remarks, Professor James Best announced plans to adopt the slogan ‘OneLKCMedicine’ in order to describe a new initiative to strengthen links between all strands of staff and students in the School. Later in the ceremony, the new OneLKCMedicine inspirational film was aired for the first time, which also featured staff from Imperial and the London Office of LKC Medicine.