New infographics show what changes in our energy sources are required to keep global warming below the internationally agreed goal of 2 degrees C.

The UK has pledged to shut its 12 coal-fired power stations by 2025, but the most cost-effective way to avoid dangerous levels of climate change could mean the early closure of most of the world’s coal power plants by 2030, according to new research led by four top climate science institutions.

Researchers simulated different ways to meet the energy demands of a growing world population over the twenty first century, whilst limiting global warming by restricting the amount of carbon dioxide emitted in generating this energy.

The window of opportunity to limit warming to 2°C is narrowing.

The new findings show that, if we are to achieve the international goal of limiting warming to no more than 2°C above average temperatures before the industrial revolution, then the least expensive way of doing so is to close a significant number – and perhaps all – coal power stations by 2030.

The researchers have produced two infographics summarising their findings on the changes in our energy sources required to keep global warming below the internationally agreed goal of 2°C, and the economic case for such a rapid change.

The research is part of the 'AVOIDing dangerous climate change' (AVOID 2) programme led by the UK's Met Office, alongside the Grantham Institute (Imperial College London), Tyndall Centre for Climate Change Research (University of East Anglia), and Walker Institute (University of Reading), in collaboration with a number of other leading climate change and energy research institutes. 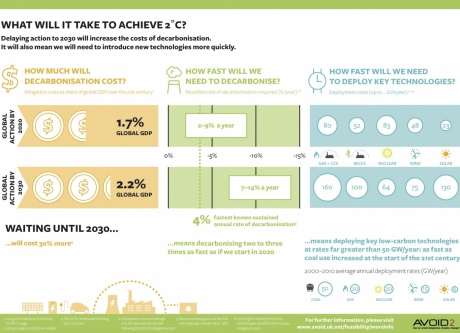 This graphic highlights that it is 30 per cent more expensive to achieve the 2OC goal if globally coordinated action to reduce carbon emissions starts in 2030, compared to a case where it starts sooner in 2020.

The analysis crucially shows that this ten-year delay would also require the low-carbon power plant technologies to be rolled out at around double the rate.

AVOID 2 researcher, Ajay Gambhir, from the Grantham Institute at Imperial College London, said: "The window of opportunity to limit warming to 2°C is narrowing, and the greater the delay before global coordinated action begins, the more costly, more technically challenging, more risky, and ultimately less feasible it becomes."

The research uses a number of established computer models that asses the range of different technologies and fuels used in the global energy system, to determine how the mix would change over time as humans put a stop to greenhouse gas emissions. Their analysis shows how some of the lowest cost scenarios involve no coal power by 2030, even if that means shutting down generators before the end of their expected life. 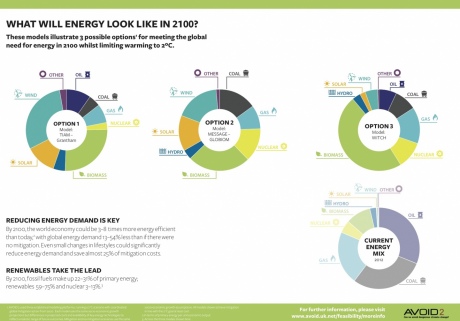 Rather than coal power, low-carbon electricity would be generated by renewable sources such as wind, hydropower, solar and biomass, as well as nuclear power plants and gas plants with carbon capture and storage (CCS) technology.

Mr Gambhir said: "It is still possible to achieve the 2°C goal by reducing carbon emissions from human activities, but the historical data about how fast new energy technologies have been developed and deployed suggests that we are facing a significant, probably unprecedented, challenge.

"For example one of the most rapid emissions reduction episodes in recent history followed the deployment of low-carbon technologies in the wake of the 1970s oil crisis, when Sweden reduced its emissions by 4 per cent per annum between 1973 and 1983. We will need to achieve this rate of emissions reduction at a global level throughout the 2020s if we’re to achieve the 2°C goal. If we delay action until 2030, this rate would need to be around ten per cent, which is hugely challenging.”

According to the simulations, the share of electricity generated from burning fossil fuels would need to be reduced from the current 60 per cent to 15 per cent, or less, by 2100. Furthermore, any new fossil fuel power plants built after 2030 would increasingly have their emissions captured by CCS technology.

Mr Gambhir said: "The key is to ensure that – globally - as few new coal plants as possible are built now, so that the plants on the system in 2030 are near the end of their lifetime, and to ensure that all new plants can be retrofitted with CCS wherever possible. We should be aiming to emit as little carbon as possible from now on if we’re serious about the 2°C target, so it is not the time to be investing in carbon-intensive technologies like coal." The Guardian: World's climate about to enter 'uncharted territory' as it passes 1C of warming