World's most sensitive dark matter detector gets even better The Large Underground Xenon dark matter experiment is the most sensitive dark matter detector in the world, and it just became much more sensitive.

Dark matter is thought to be the dominant form of matter in the universe. Scientists are confident in its existence because the effects of its gravity can be seen in the rotation of galaxies and in the way light bends as it travels through the universe.

We have looked for dark matter particles during the experiment's first three-month run, but are exploiting new calibration techniques better pinning down how they would appear to our detector

Although nobody has found dark matter, yet, we are one step closer, thanks to the latest developments in a large scale physics experiment.

Researchers working on the Large Underground Xenon experiment (LUX) are looking for weakly interacting massive particles (WIMPS), which are among the leading candidates for dark matter. Because WIMPs are thought to interact with other matter only on very rare occasions, they have yet to be detected directly. So far, LUX hasn’t detected a dark matter signal, but its sensitivity has enabled scientists to all but rule out vast mass ranges where dark matter particles might exist.

In a new study submitted to Physical Review Letters and posted to ArXiv, researchers reveal that LUX’s sensitivity for detecting low-mass dark matter particles has improved by more than a factor of 20, enhancing their ability to look for WIMPS.

The LUX scientific collaboration, which is supported by the USA Department of Energy and National Science Foundation (NSF), includes Imperial College London and 18 other universities and national laboratories in the USA, the UK, and Portugal. 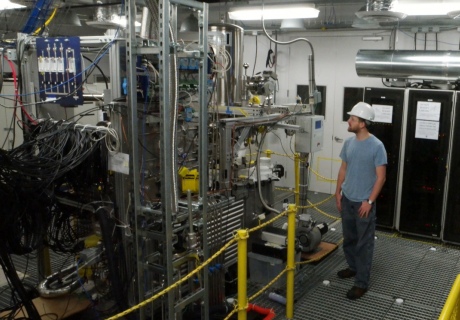 The work re-examines data collected during LUX’s first three-month run in 2013, and helps to rule out the possibility of dark matter detections at low-mass ranges where other experiments had previously reported potential detections.

LUX consists of a third-of-a-ton of liquid xenon surrounded with sensitive light detectors. It is designed to identify the very rare occasions when a dark matter particle collides with a xenon atom inside the detector. When a collision happens, the xenon atom will recoil and emit a tiny flash of light, which is detected by LUX’s light sensors. The detector’s location, beneath a mile of rock at Sanford Underground Research Facility, helps to shield it from cosmic rays and other radiation that would interfere with a dark matter signal.

"We have looked for dark matter particles during the experiment's first three-month run, but are exploiting new calibration techniques better pinning down how they would appear to our detector” said Dr Alastair Currie from the Department of Physics at Imperial College London, who led the analysis of the result. "These calibrations have deepened our understanding of the response of xenon to dark matter, and to backgrounds. This allows us to search, with improved confidence, for particles that we hadn't previously known would be visible to LUX."

One calibration technique used neutrons as stand-ins for dark matter particles. Bouncing neutrons off the xenon atoms allows scientists to quantify how the LUX detector responds to the recoiling process.

“It is like a giant game of pool with a neutron as the cue ball and the xenon atoms as the stripes and solids,” Professor Rick Gaitskell from Brown University said. “We can track the neutron to deduce the details of the xenon recoil, and calibrate the response of LUX better than anything previously possible.”

In late 2016 LUX will be decommissioned to make way for a new, much larger xenon detector, known as the LUX-ZEPLIN (LZ) experiment. Compared to LUX’s third of a ton of liquid xenon, LZ would have a 10-ton liquid xenon target, which will fit inside the same 72,000-gallon tank of pure water used by LUX. The LZ experiment is expected to achieve over 100 times the sensitivity of LUX.

Dr Henrique Araujo, from the Department of Physics at Imperial, leads the UK contribution to LZ, which is funded by the Science and Technology Facilities Council. He adds “The LUX calibration techniques which enable this result are very exciting also for LZ – making the next-generation experiment even better. It is also great to see this xenon-based technology, which was partly pioneered here at Imperial, continue to lead the way in the hunt for dark matter!”