As a 17-year-old sitting in the control room at NASA, alumnus Libby Jackson (BSc Physics 2002) decided that she wanted a career in the space industry.

As British astronaut Tim Peake prepares to leave on his six-month mission to the International Space Station (ISS), she shares her excitement in being part of this historic occasion.

What’s your role in the Principia project?

I am managing the education programme around the mission. Tim wants his mission to inspire the next generation to get involved in science, technology and maths. That’s something that I’ve always believed in so this job is a dream come true for me.

Ever since I sat in mission control in NASA when I was 17, I’ve known that this is what I want to do, so I just did it.

I used to be a Columbus flight director for the ISS and I’ve been working in human space flight for almost nine years, so I know what Tim’s going to be doing up there, and I’m putting that knowledge to good use at the UK Space Agency.

On launch day I’m going to be at the Science Museum, helping out the teams who are putting on the Big Screen programme doing a bit on stage too). I’ll be talking with people, answering questions and being helpful. I hope the entire college is just going to pile into the Science Museum!

Have you always been captivated by space exploration?

Definitely. I grew up  fascinated by space. When I was 17 and we had to do work shadowing, a friend and I emailed NASA to ask for a placement – this was before email really got going – and amazingly they said yes! When I got back, I knew that I wanted to be a flight director.

Tell us about your journey from Imperial to the UK Space Agency.

I knew what I wanted to do, but I wasn’t aware that the European Space Agency was going to fly Columbus and, at the time, the UK didn’t do human space flight. I liked physics so I came to Imperial to pursue that. I didn’t know at that point what I was going to do with my degree, I just figured it out as I went along.

I realised pretty quickly that I wasn’t going to be a physicist. Walking down a corridor in Blackett one day, I picked up a brochure with an astronaut on the cover, which is how I discovered there was a master’s course at Cranfield so I went off to do that and then took it one step at a time, firstly doing operations for satellites, then moving to Germany to work at the Columbus Control Centre and finally becoming a flight director, my dream job from the age of 17.

When Tim’s flight was announced, I knew I had to be involved. I moved back in April last year, and I’ve been focused on this mission ever since, so it’s crazy that now the launch is finally happening! 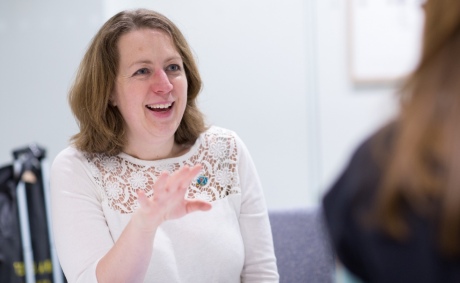 How has your time at Imperial helped you?

The breadth of what we studied was fantastic. I chose all the space options, which meant that I ended up with a horrific set of five final exams in two and a half days. I remember halfway through my space physics exam, which was the middle of the five, my brain just melted and I couldn’t have told you what 2 + 2 was. That did prepare me in some ways!

A physics degree from Imperial does have a special status and people take you more seriously, realise that you know what you’re talking about.

What advice would you give to anyone looking to get into the space industry?

My advice is work out what you enjoy doing. Follow your dreams, follow your heart, and never let anyone tell you that it’s silly. You might not know how you’re going to get there but don’t worry about it. Just keep that goal.

There’s a lot of talk about the UK becoming important centre for space exploration in the future, and of how Tim’s launch is going to inspire future generations to look towards the skies again. Do you agree with that?

Absolutely, it’s a very exciting time in the UK. Back when I was a student I was very downbeat. I knew what I wanted to do but the UK didn’t do human spaceflight. It’s been a gradual change of position, the result of the industry saying ‘yes, we want to do it’, and the economic case being been made. We’re now out to capture 10% of the global space market by 2030 - that’s significant for a small country like ours.

Tim wants his mission to inspire the next generation to get involved in science, technology and maths.

We’ve had a consultation paper out about where we should put a space port, and we published our first National Space Policy this week. It shows that the UK is serious about space.

The work being done at Imperial - medicine, materials, chemistry, physics, maths, all of that - is hugely important in everything that we’re doing in the space industry because we’re looking at new technologies and cutting edge materials. Imperial’s strengths play directly into what the industry needs so I’m sure there will be many more alumni who get involved in the industry in some way, shape or form. It’s wonderful that you are involved in all the celebrations tomorrow.

What inspires and motivates you?

Space inspires me! I have always been fascinated by human space flight; the Apollo moon landings, the astronauts, exploration. A couple of years ago at Farnborough Air Show, Tim was giving a talk to group of kids. I remember looking out at these astronauts talking to the kids, and saying to my future collegues ‘this is why we should be doing human space flight, this is why the UK needs to do it’, which is something I’ve always believed in.

Ever since I sat in mission control in NASA when I was 17, I’ve known that this is what I want to do, so I just did it. I’ve never worried that it might not happen. I’ve learnt to stop crystal ball gazing and just take one step at a time. Things occasionally pop up and you go ‘yes, that!’ There’s no big plan and yet I sit here on the eve of launch and I can’t believe I’m doing this.

People ask me what I’m going to do next and I don’t know, but it doesn’t worry me. Something will turn up. The right opportunity will present itself, and I’ll grab it and enjoy it.

Having fun also motivates me. I go to work every day and just can’t believe that I get to do this, never mind that I get paid to do this! That’s what everyone in life needs to find. Whatever you do you’re going to be doing it every day. You need to do something that excites and inspires you.

What happens after the launch?

The launch is just the beginning. The mission has six months to run so we have a huge host of education activities going on and we’ll be linking up with schools and media opportunities. Tim will be sending lots of photos and videos back to Earth and we’ll be working with the European Space Agency.

We’re hoping appetite in the country is going to be huge but we will have to work to maintain that. It’s a marathon - we’ve been training and prepping and tomorrow is the big sounding klaxon followed by six months of the mission. And even that’s not the end because then he’ll be back and he’ll be a flown astronaut. We will be working to ensure that the education programme has a strong legacy,

From day one Tim has said ‘I want this to be for the next generation and all the kids out there’ so there will be a lot more great stuff happening.

UK's biggest ever space celebration to take place on 15 December

Space researchers from across the country will descend on South Kensington to celebrate the launch of British astronaut Tim Peake on Tuesday.

The main event in the evening, taking place at the Science Museum, will include a live link-up with Peake shortly after the Principia mission has docked with the International Space Station (ISS).