DNA profiling reveals grey squirrels are not as good invaders as we think, and that humans played a much larger role in spreading them through the UK.

Grey squirrels were imported to the UK from the 1890s onwards, and the traditional view is that they spread rapidly across the UK due to their ability cope with new landscapes. Different populations of grey squirrels were thought to have interbred into a ‘supersquirrel’ that was better able to adapt and spread.

Grey squirrels are not as crazy invaders as we think – their spread is far more our own fault.

However, new research shows greys may not be as hardy as once thought, and were helped much more by humans in their conquest of the British Isles. Dr Lisa Signorile compiled a DNA database of nearly 1,500 grey squirrels in the UK and Italy during her PhD studies at Imperial College London and the Zoological Society of London.

She was able to show that different squirrel populations are still genetically distinct, meaning they did not interbreed much and did not create a supersquirrel. The difference between populations also means Dr Signorile and coauthors were able to trace where populations in new areas had come from.

In many cases, new populations of grey squirrels are not related to nearby populations, and instead have come from a long way away. The only way they could have travelled so far was by human intervention. For example, the population in Aberdeen is most closely related to populations in Hampshire, around the New Forest area.

“It has been thought since the 1930s that grey squirrels were all the same, spreading across the country as one invasion front. After a century, genetics has proved that this isn’t correct. They are not that good at breeding and mixing – in fact there are clear signs of inbreeding,” said Dr Signorile.

“Grey squirrels are not as crazy invaders as we think – their spread is far more our own fault.” The research is published in two papers, in the journals Biological Conservation and Diversity and Distributions.

Dr Signorile also discovered that one of the worst offenders at spreading grey squirrels was the 11th Duke of Bedford, Herbrand Russell. Russell was involved in many successful animal conservation projects, but released and gifted many grey squirrels around the UK from his home at Woburn Park.

Russell also released populations in Regent's Park, likely creating the London epidemic of greys. “It was a time when we didn’t know invasive species could cause so much damage,” said Dr Signorile.

Still on the move

Although not as good invaders as previously thought, greys still outcompete native red squirrels for resources, and carry diseases that kills reds but not greys. Greys have largely displaced reds in England and Wales. “Eradication or control programs are still needed, in particular in areas where red squirrels are present,” said Dr Signorile.

Scotland is one of the last places to be invaded, but humans are still helping grey squirrels move into new areas today, albeit more unwittingly. Dr Signorile also investigated where recently-spotted greys have come from. 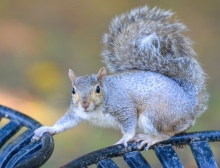 She found that one individual that was captured on the Isle of Skye in 2010 had come from Glasgow. In this case, genetic profiling confirmed a report that the squirrel had stowed away under a car bonnet and escaped on Skye.

Dr Signorile also examined the case in Italy, where grey squirrels are more of a recent introduction and could be sold as pets until 2012. Her analysis of populations in different regions of the country confirmed an illegal trade in grey squirrels. “It illustrates that ‘attractive and cute’ species are often spread further by people,” said Dr Signorile.

Aside from revealing the surprising result that the success of grey squirrels is in part based on our help, Dr Signorile said the study also suggests new approaches are needed to tackle their spread. “We put a lot of money into controlling grey squirrel numbers, but nobody is trying to prevent their movement and discourage people from picking them up. Decision-makers should look into preventing spreading of greys by human hands.

“The public also needs to be aware of the risk of even accidentally moving squirrels. People think grey squirrels are already everywhere, so it is not a problem, but it can be, especially in areas of Scotland where there are not yet established populations.”

The findings of the genetic study could also be applied to other invasive species, said Dr Signorile, especially where human movements may play more of an important role. These include the more ‘ornamental’ species that are considered attractive, such as London’s ring-necked parakeets and Chinese water deer.