Logging can encourage black rats to invade tropical rainforests by creating habitats they prefer, giving them the chance to displace native mammals.

Logging stresses animals living in tropical rainforests by disrupting and removing some of their habitat, but a new study shows that logging can cause further problems for the forests’ inhabitants – by providing the perfect conditions for invasive species.

This study sends a strong message for reducing the impact of logging by minimising the damage to forest structure.

Black rats are an invasive species across much of the world, having been introduced via shipping by Europeans since the 1600s. Their invasions have caused bird extinctions and brought new diseases that have infected native mammals.

While rats are widespread, they largely avoid mature forests. These forests contain large trees, providing little low-level cover, and have a forest floor covered with leaves, which are noisy for rats to run over, attracting predators.

The new study shows that logging makes rainforests attractive to black rats. Logged forests have denser undergrowth, providing more cover for rats scuttling along the forest floor, and also more fallen wood, which harbours more rat food in the form of insects. While these factors are good for many small mammal species, both invasive and native, black rats appear to favour these small changes more strongly than native species.

On the island of Borneo, black rats have been present for decades, but have largely stayed around urban areas. However, they have recently started to enter the margins of the rainforest, encroaching on the habitats of native small mammals.

To learn more about why black rats are moving in now, an international team of researchers led by Imperial College London studied how the rats behave when travelling through forest habitats in Borneo. The results are published in the journal Biotropica. 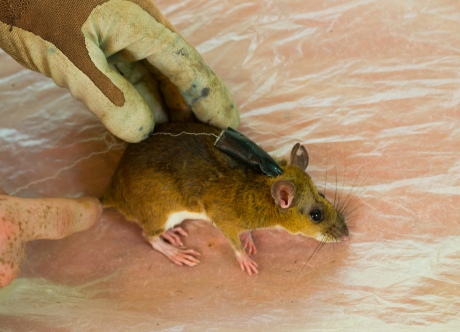 Attaching a cotton spool to a native rat

The team tracked the movements of more than forty rats across four species, including black rats and three native species. They found that across all the species, black rats have the strongest preference for disturbed habitats associated with logging, facilitating their invasion into this new habitat.

“This could be bad news for native mammals who might not be able to compete with black rats for food and resources. It’s also bad for the forest, as many small mammals are important seed dispersers, helping rainforest plants to grow, and they are also prey for larger animals.”

“For example, trees being felled often pull down neighbouring trees, leaving behind lots of deadwood that is perfect for black rats. Clearing vines that connect trees and accurately aiming where felled trees will land would reduce this debris.” 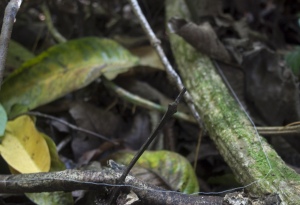 To find out exactly what kinds of terrain different rat species preferred to travel on, the team first caught the rats in a trap. They then attached a spool of thin cotton to their backs with a safe, dissolvable glue, and attached one end of the cotton to the trap site. As the rats ran off the cotton reeled out behind them, snagging on areas of the forest floor and allowing the team to follow the exact trail taken by each individual.

The next stage of the research will be to track how rapidly populations of rats are building up and what the impacts of this will be. “We need to understand more about what happens when and if black rats start to replace native small mammals in the forest,” said Dr Ewers.