An Imperial expert in joint mechanics and the effects of blast injuries has been recognised for his achievements by a prestigious US institution.

Professor Anthony Bull, Head of the Department of Bioengineering, will be inducted into the American Institute for Medical and Biological Engineering (AIMBE) College of Fellows in April 2016. He was elected for outstanding contributions to the ‘basic mechanics of joints and tissues, and the study of military blast injuries’. 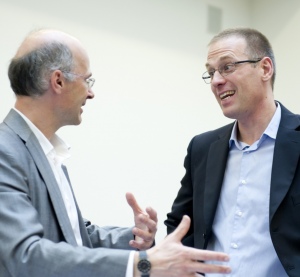 Professor Bull’s research focuses on understanding the basic mechanics of joints and developing new technologies to diagnose and treat injuries and diseases. His work has been applied in a range of areas such as developing better sports therapies for UK rowers and cricketers; understanding the effects of blast injuries to mitigate their effects on military personnel; and improving our understanding about how age-related diseases, such as osteoarthritis, affect the mechanics of the body.

Professor Bull is the Director of the Royal British Legion Centre for Blast Injury Studies at Imperial. This is the first collaboration of its kind in the UK, where civilian engineers and scientists work alongside military doctors, supported by charitable funding to reduce the effects of roadside bombs and Improvised Explosive Devices (IEDs).

Professor Bull also leads the Musculoskeletal Medical Engineering Centre and Sports Innovation Challenge. These activities put Imperial at the forefront of translational musculoskeletal and rehabilitation research in the UK.

Professor Bull said: “I am delighted to accept this honour which is recognition of the excellent work carried out by my many colleagues and students in the Centre for Blast Injury Studies and the Musculoskeletal Medical Engineering Centre."

The College of Fellows is comprised of the top two percent of medical and biological engineers in the USA. The College Fellows comprise some of the most accomplished and distinguished engineering and medical school chairs, research directors, professors, innovators and entrepreneurs.

Professor Bull will be one of 160 new Fellows to be inducted into the College of Fellows Class of 2016 at a formal induction ceremony during AIMBE’s 25th Annual Meeting at the National Academy of Sciences Great Hall in Washington, DC on April 4, 2016.