A prototype drone that can spot leaks and fix pipelines from the air has won a major international drone competition.

The Buildrone team, part of Imperial’s Aerial Robotics Lab, was supervised by Dr Mirko Kovac and led by PhD student Talib Alhinai who are both from the Department of Aeronautics at Imperial. The competition was an initiative of the United Arab Emirates, which aimed to bring together the innovative technologies behind civilian drones and showcase how they can be turned into practical solutions for improving people’s daily lives. 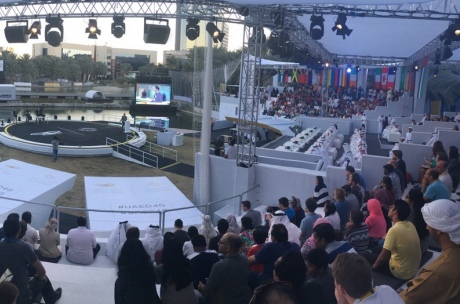 The team competed in front of a huge audience of VIPs

Talib Alhinai talks to Colin Smith about what it was like to compete in front of royalty and how the prototype drone could help countries preserve their precious resources in the future.

Tell me about the prototype drone you built. What can it do?

Our project, Buildrone, is a novel repairing flying robot that is designed to detect and repair leaks in pipelines.

Compared to current methods where humans have to maintain pipelines, our approach offers major time and cost savings while simultaneously reducing risks to engineers when doing inspection and repair tasks. 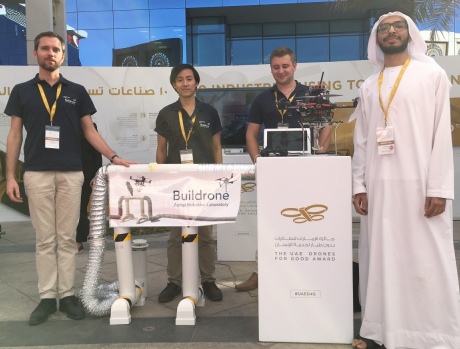 The aerial robot is currently configured to carry out its repairs by depositing liquid polyurethane foam on a leaking pipeline. After the foam is applied, it takes less than five minutes to fully expand upon contact with air to effectively seal the area. The sealant is an excellent material because it is lightweight, fitting in with the drone’s carrying ability, and can expand up to 25 times its size after it is applied.

Why do you think there is a need for this technology in the world?

Chemical leaks from pipeline networks are one of the most dangerous incidents in the energy and chemical industry. Oil spills in vulnerable environments, leaks from explosive methane gas in cracked pipelines and toxic chemicals escaping supply pipes are a major hazard and can endanger humans, the ecosystem and lead to substantial financial losses.

Recent examples of pipeline leaks include: the toxic spill of cancerous chemicals in the Yellowstone River in the United States; a leak in Alberta, Canada, where five million litres of oil polluted the environment; and a gas pipeline explosion that killed five people in Mexico.

Twenty five per cent of precious drinking water around the world is also lost due to leaking pipelines. The United Arab Emirates alone loses at least ten per cent, Saudi Arabia loses up to a staggering 60 per cent of its water through pipeline leaks and Syria and Jordan lose up to 45 per cent.

These leaks can be prevented and aerial robotics can be a game-changing tool to not only detect the leaks but also repair it on-site and in real-time.

I’ve been told that your project caught the attention of a royal in the region.

Yes, Sheikh Mohammed bin Rashid Al Maktoum, the Vice President and Prime Minister of the United Arab Emirates and the Ruler of Dubai witnessed the final day of the competition and personally presented us with the award. It was a great privilege to meet him and I feel immensely honoured to have had the opportunity to personally showcase our aerial robot to him. He is a real advocate for the use of technology to benefit humanity.

We plan on creating a more user friendly interface for the robot and also fine tune it to be more robust in challenging weather conditions. We also want to further develop the prototype for a pilot project with one of our industrial partners in the next six to 12 months.